Sunday was event day, specifically the 2.5km swim at the Chateau de Chantilly, part of the Castle Race Series of sports festivals.

I'd signed up when I realised Chantilly features in A View To A Kill as baddie Max Zorin's French HQ and horse-racing base. What a fun way to visit a Bond location and perhaps raise some money for charity! I selected Unicef for the latter, as the late Roger Moore was one of their ambassadors for many years.

I was a little sad and daunted at the prospect of doing the event without Howard to cheerlead, take care of my glasses, and stop me from freaking out too much. Luckily, I discovered that Chantilly is just 20 minutes by train from Paris Gare du Nord, which meant my Paris-based pal Mut was able to join me on the day.

We met at the station and made our way to the venue, where I negotiated the maze of registration, COVID documentation and temperature check, collecting my race pack, changing into my wetsuit, and presenting myself at the start line when they called for les bonnets bleus to come forward.

Here, a jolly French gentleman cheered us into the water in turn: "Alice, from London! Trois, deux, un...ALLEZ ALLEZ ALLEZ!"

I slid into the Grand Canal and began two laps around a series of inflatable buoys, accompanied by a spotter in a kayak to help out if I got in trouble and steer me round the course correctly.

The first bit is always the worst. It's cold, I'm tired already, there is no way I can keep this up. Then you get into the rhythm, the next buoy slowly approaches, then you're past it and looking ahead to the next one in the distance. Slowly, weed wrapping itself around my face and legs, I made it round the outside of the T-shaped course and on to the second lap.

By this time I knew I could do it; I just had to keep going, and breathing, and moving my arms and feet. As I motored down the final straight towards the green finish arch, the kayakers yelled encouragement and applauded. A kind French woman gave me her hand to haul me out, and I was done. Mut found me clutching my medal, a banana and a paper cup of water, and reunited me with my glasses.

I had warned Mut from past experience that after the swim I would be tired, talkative, clumsy, eat everything in sight and make poor decisions. He guided me gently to a creperie, where we had savoury pancakes with cheese and ham, then I saw him off at the station and went to see a French film.

Going to the cinema in a foreign country is something I've always wanted to do for some reason, and when I saw there was a screening of retro spy spoof OSS 117: Alerte Rouge en Afrique Noire, it was as if they had put it on especially for me. Some of the dialogue was beyond me but most of the gags were visual, and I had a good time.

My final adventure for the day was getting a Chinese takeaway and eating it in my hotel room.

Here, I was overwhelmed to discover that my very generous friends and family had more than doubled my fundraising target amount, with the total currently standing at £1,225 (and my JustGiving page still open for business).

Mission accomplished. Now I could relax and have some fun with my remaining two days in France. 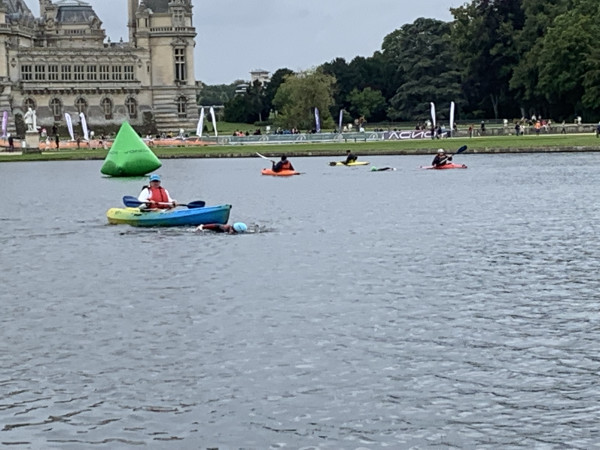