Last night I attended my first online gig: The Divine Comedy live from the Barbican. I bought a ticket and logged in for the 8pm livestream (you could watch up to three days after the release, but I wanted to have an experience as close to the live concert as possible).

In a prerecorded segment screened before the start, Neil Hannon promised a set of 'comforting, cosy, nice, all the ones you know' songs. Then the band opened with 'Absent Friends', poignant for obvious reasons.

There was a small live audience at the Barbican (I was too slow to get a ticket for this). They were thanked for attending, as were we out in 'virtual land'.

The performers stood apart from each other. Masked stagehands exchanged guitars. "I'm not match fit!" Neil exclaimed, out of breath after one number. "I'd better talk for a bit."

The Divine Comedy don't feature on my top ten list of bands yet somehow I seem to own almost all their smart, whimsical albums full of literary and historical references. It was lovely to hear the familiar back catalogue: National Express, Your Daddy's Car (either my favourite or second favourite) and Songs of Love, which non-fans will recognise as the theme from Father Ted.

The performance lasted for an hour - short for a gig, but as long as you want to spend looking at a screen after a day of Skype meetings - and ended with a socially-distanced bow.

It was nice to attend a gig wearing my pyjamas ("OLD!" said my flatmate when I revealed my plans), and not to annoy anyone (except possibly my flatmate) by singing along to "SHE SAID! THERE'S SOMETHING IN THE WOODSHED!"

But I very much hope this is not the future of live music. 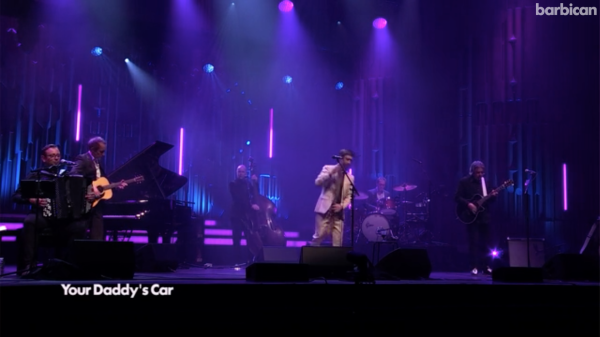