Saturday was the day of the Hever Castle Swim, which I'd been equally looking forward to and dreading since I signed up for the one mile distance early last month.

It was a chilly day, and we were informed that the water in the lake was 13°. On arrival there was a lot of rushing about - register, receive your timing chip to be attached to left ankle and colour-coded swimming hat denoting your wave of swimmers (mine was orange, which I took to be a good sign), proceed to the bag drop - followed by a lot of hanging about.

It started to rain as we received our final final briefing at the castle's Loggia Terrace, and it was a relief when it was finally my turn to step across the timing mat, sit on the bottom step and slide into the depths with all the grace of a sealion.

The first part was a bit scary, as you strike out for the middle of the lake and a series of orange inflatable buoys that don't seem to be getting any closer. After four of those we made a 90° turn to the left and entered the river section.

This was much better: so shallow I bumped against the occasional tree root, and could have waded out if I'd got into trouble, and with only one possible direction to go in.

I swim the way I ride a motorbike: I'm perfectly competent at it but I am never going to be fast. I chugged along doing breast stroke and checking out the scenery, allowing speedier swimmers to overtake on both sides.

I lost track of the distance in the twists and turns of the river, but suddenly the foliage on the banks gave way to brick and stone, and I was working my way back past the start point towards the orange inflatable FINISH archway. It took a little under an hour, I think.

I crawled out like a drowned rat and was given a medal and a paper cup of hot Ribena.

I was pretty sure I could swim a mile before the event, but I didn't have concrete proof. Managing it under the conditions of an official event has been a huge confidence boost.

More importantly, you've helped me raise over £500 for #HelpTheRobinsons, doubling my target amount.

I'm keeping the donation page open for a couple of days in case anyone was waiting to see if I could actually do it. 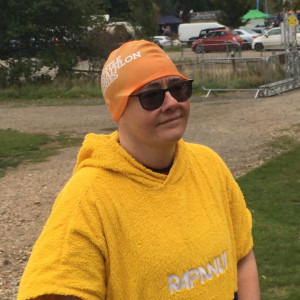