I had a birthday and it was good. Thank you to

st_crispins for the virtual gift and

howlin_wolf_66 for the kind message!

I kicked off the day with a swim in the lake at Beckenham, returning for coffee and a shower before heading out again.

My destination was the (former Millennium) Dome for Up at the O2, in which you ascend the summit (52 metres high, a metre for each week in the year, as we learned from the introductory video) and look at the views of London from the top. I'd have fancied this anyway, but I was, of course, particularly invested because Pierce Brosnan runs around on the Dome at the start of The World is Not Enough (1999).

I met Howard at the venue and we had some lunch before proceeding to Base Camp, where we swapped our shoes for trainers and gained a harness each.

You clip yourself on to a line to ascend the walkway, taut tarpaulin with ridges on the steep parts and temptingly bouncy. It's 30° at some points, which made going down a little alarming. Apparently it's slippery when it rains, but luckily yesterday was a glorious sunny day.

There was plenty of time to stand on the top, and I was glad I had been upsold a plastic glass of champagne. We admired Greenwich Observatory, Canary Wharf and the Crystal Palace transmitter, my home turf. And, of course, I got my Bond on. 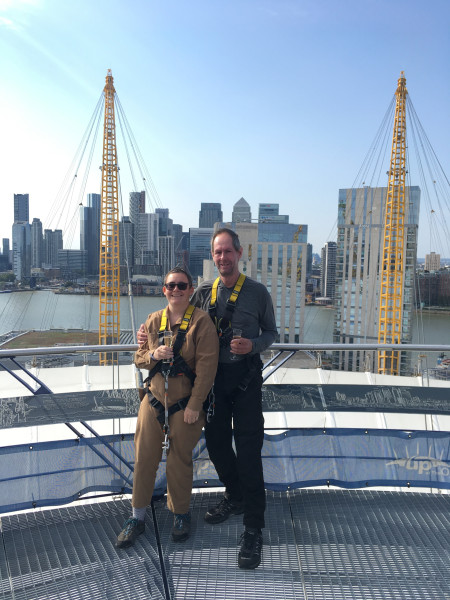 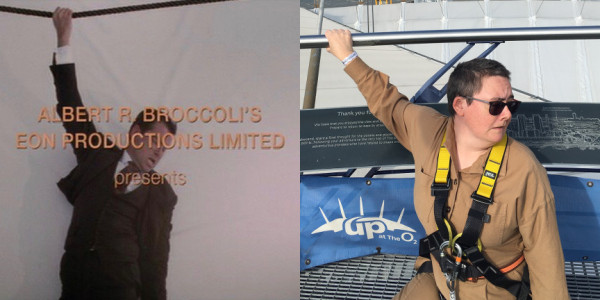