Last week, the government announced 'support bubbles', which would allow people living on their own to join up with another household.

To my surprise, there was a specific provision for people in relationships where one partner lives alone and the other has e.g. a flatmate. So I discussed it with my flatmate, and we agreed to extend our bubble to include Howard.

On Saturday, I rode down to Stockbridge to meet him, and we greeted each other with a hug for the first time since February (we'd met up twice during lockdown, maintaining social distance). We sat in the churchyard to eat our sandwiches, along with several other groups who were doing the same. A café where we'd eaten on a previous occasion was doing takeaway coffee and ice cream, so I queued for some of that. It felt good to do normal things like hold hands, and share a bag of crisps rather than sitting two metres apart eating separate picnics.

We rode a couple of miles to Danebury Hill Fort to have a walk and look at the wild flowers. Plenty of other people had had the same idea, but there was enough room for all.

First order of business back at Howard's place was getting him to run the clippers over my hair, which had been getting increasingly annoying over three months of unchecked growth. I had it done pretty severely, much to the surprise of my colleagues this morning, as they only knew the lockdown version.

I've been missing the sea, so Sunday's ride was to Weymouth and Portland. At Portland I climbed up Pulpit Rock, so named because it's supposed to look as if there's a Bible leaning against it. I was a little anxious about getting down again, as, like a cat, I am much better at getting up things than reversing, but I had Howard on hand to tell me where my feet should go, and inform me that I wasn't to get stuck up there because my bike was blocking his in.

We had lunch at the café on Chesil Beach and saw two of the rare little terns that are being encouraged to breed there.

Before I headed home, I was able to visit

callmemadam. We sat two metres apart in the garden and had a cuppa. Luckily the weather was good.

When I got home, my flatmate gave the traditional greeting of pointing at me and laughing while saying "HAIRRR!! CUTTTT!!" 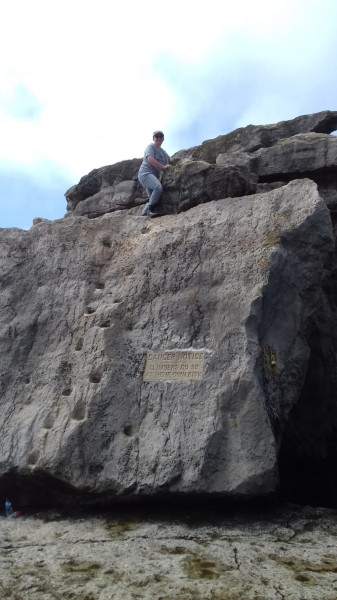