It will surprise nobody here that I am a huge fan of Cyrano de Bergerac in all its forms (including Steve Martin in Roxane). The BFI is currently showing the 1990 Gérard Depardieu film, which was my first encounter with the story, so I booked Friday night tickets for me, Howard, and our friends C, R and A (A is now 11 and you might remember her from the terrific time she had at my 40th birthday party).

It does feel slow by modern standards (we all agreed that Cyrano takes a loooooong time to die, even though both C and I confessed that we always cry at the end), and I was a bit worried about A's attention span, but as soon as the end credits rolled she turned to me and said "That was SO COOL!"

Afterwards, we went to Pizza Express. "Shall I lead the way?" I asked C.

On Saturday, Howard and I visited the Estorick Collection in north London to see an exhibition of Futurist paintings by Tullio Crali. It's astonishing that I had never seen his 'aeropaintings' before, or even heard of the genre, because they were right up my street: 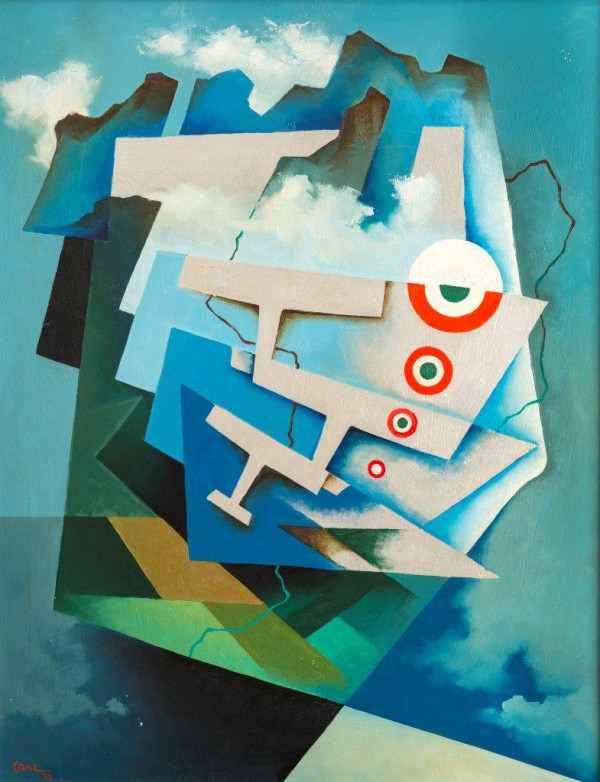 That evening, not having had quite enough culture, we saw 1917 at the very comfortable Everyman cinema in Crystal Palace.

All I knew about the film was that it seems to take place as one long shot, rather than in scenes. This meant we ran along beside, behind or in front of the two soldiers tasked with delivering a message, and gave the movie an interactive quality, at times like a dream or a theme park ride.

It stretched our credulity a bit but it was an enthralling journey, and a new way of telling stories about the First World War when you'd think they had all been played out by now.

It's not too much of a spoiler to say that one character injures his hand on barbed wire early on, then almost immediately plunges it into a rotting corpse, and I spent the entire film worrying about whether he'd get gas gangrene (don't google that).

What with this and Cyrano, I spent a lot of my weekend watching fighting around Arras. Both films also have a scene where the tough fighting men listen in rapt silence to a song from their homeland, because some war movie clichés are here to stay.
Collapse