I'm doing very well out of my BFI membership. Yesterday it was a 30th anniversary screening of The Curse of Fenric, probably my favourite Sylvester McCoy Dr Who adventure.

Many people don't like the mid-80s version of the theme tune and opening titles, but they're what I grew up with, and when it kicked in I could feel myself getting just as excited as I did when I was 11.

There's a lot going on in this story, what with Vikings, Russians, chess and computers, ancient alien evil and vampires from the future, and there were moments when I was as mystified as I was at the original broadcast. I got the Maidens' Point innuendo this time round, though.

(Hard to believe there are people complaining the current incarnation of Who is too leftie when in 1989 we had someone warding off vampires by waving the Communist Party emblem at them.)

As well as the film cut of the story, we were shown a bundle of goodies from the upcoming Season 26 release. There was footage of Sophie Aldred's final dive into the sea off Lulworth Cove, which made us realise what a terrifying stunt it is, plus this piece of joy:

Afterwards, there was a Q&A with Aldred and writer Andrew Cartmel, followed by a chance to queue for their autographs. Ace has always been my favourite companion and the one I most wanted to be (

kowarth decided I was Ace the moment we met, and

strange_complex has said something similar), so this was not a chance I was going to miss. Used, after 30 years around the fandom, to dealing with awkward people, she was a total delight and said Alice was a nice name. 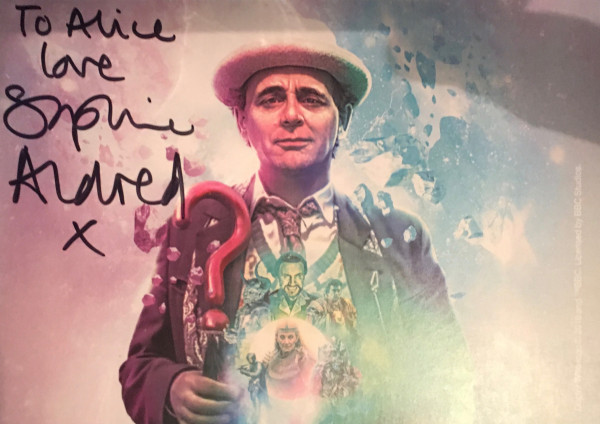 Today I have been at a Hundred Man Kumite, a karate thing where you do 100 rounds of sparring.

I should make it clear that it's not 100 rounds of beating the living daylights out of each other, because nobody is going to learn anything productive from that. Instead, we were given a technique to practise, and spent a couple of minutes on it before moving round to the next person and trying again, or being given something new.

It was still a pretty intense four hours, though. And I must have bowed at least 300 times - at the start and end of every bout, plus every time you move round. I was very ready for a bath when I got in.
Collapse