I spent yesterday afternoon standing in the rain at Dunsfold Aerodrome, waiting for a Vickers VC10 to make some noise.

I appreciate this is a niche pastime.

This particular aircraft was a Super VC10, the last of the model off the production line at Weybridge and now the property of Brooklands. I, along with 70 or so other punters, had come to see/hear it start up and taxi along the runway.

Riding round the perimeter track of an active airfield to the parking area, past security and a barrier at the gate, was a thrill in itself. At 1PM, a volunteer came to tell us that things would be delayed as the plane wouldn't start: "It started beautifully at 8:30 this morning!"

Ten minutes later, the engines began to run. It was worth the wait. Whenever I thought that this must surely be maximum noise, it got just a little noisier. Finally, the plane began to move, turned around (blowing a volunteer's hat off, to much hilarity) and made stately progress up the runway, turned around, and came back. 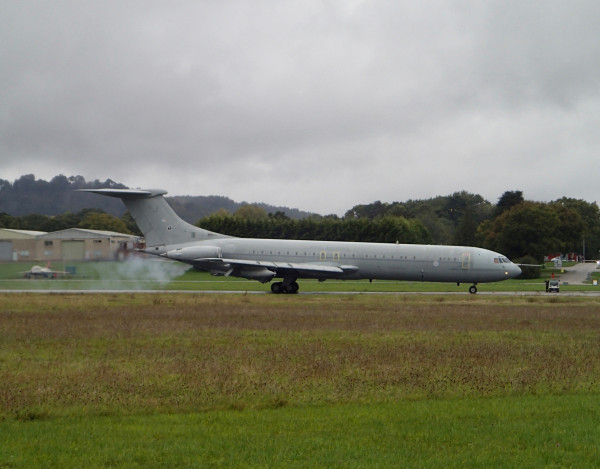 Then they ran the Napier-Railton, a beast of a 1930s race car with a 24-litre aeroplane engine. It has no starting-handle and requires bump starting, which on this occasion took five men running behind the car and getting a faceful of smoke when it eventually deigned to get going. 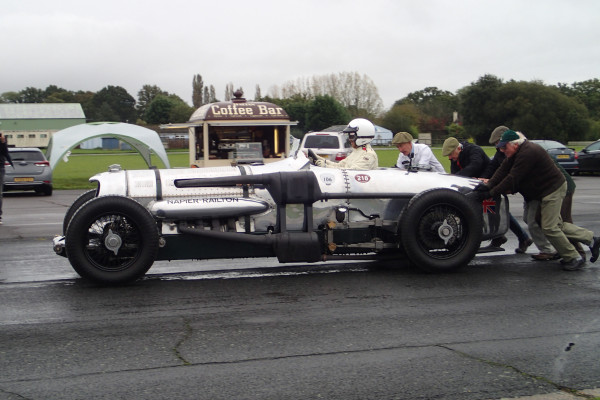 After things had quietened down, I went on board the VC10 to learn about its history and sit in the cockpit. When I was in the Air Training Corps, I went on a refuelling flight in one of these (we filled up two Jaguars and another VC10, and it was awesome), so I was a little sad to see it reduced to a museum piece. Walking past the huge fuel tanks in the rear of the aircraft brought it all back.

It was raining more heavily when I emerged, so I chatted to the Napier-Railton crew for a bit. (One of them was the dead spit of Bill Pertwee in Dad's Army, which was nice for me.) Of course, they all said "Nice bike you've got there! What'll it do?" and showed me photos on their phones of their own cherished, classic bikes.

When the weather eased I extracted myself and they waved me off with cries of "Mind how you go! Don't brake in the corners!"
Collapse