Taking out BFI Membership was an excellent decision. This month it has brought me priority tickets to James Bond Day, a triple bill of On Her Majesty's Secret Service (50th anniversary), Moonraker (40th anniversary) and The World Is Not Enough (20th anniversary, yikes, how can this be, I swear it came out a couple of years ago).

I went with my Twitter friend Hannah, who travelled down from The North for the occasion. We met at Waterloo and just had time to buy a drink before the first film.

OHMSS is in my top three Bond films anyway, and it's my #1 for settings and costumes. '1960s ski lodge' is very much my aesthetic (see also North by Northwest). The Connery films might have that early-1960s cool but in 1969 we get Bond in an orange rollneck/brown polyester suit combo, and even Miss Moneypenny has a wedding hat with psychedelic swirls.

Afterwards, we had the very wonderful experience of a Q&A with George Lazenby, hosted by David Walliams. Lazenby was amiable and sweary and I'm pretty sure at least 50% of what he told us about filming Bond was lies, but charming ones.

st_crispins, they played his scene from The Return of the Man from U.N.C.L.E.! (He looked mortified.)

We were told that George would be signing autographs on the balcony, and we got in the queue. It was...costly, but we agreed we would only regret it later if we didn't go for it.

While we were queuing, I spotted my friend Ed of James Bond Food below me. Luckily he saw me before I was forced to shout his name from the mezzanine. Then someone else in the queue asked if I was Alice, and revealed himself as a fan of my Twitter. Hello there!

At last it was my turn to select a photo and have it signed.

Then we had to rush back to the auditorium for Moonraker. Roger Moore is my least favourite Bond (sorry, Rog; sorry also, Hannah) but I'll admit his films are the most fun to watch on the big screen with an appreciative audience. I managed, for once, not to blub at the end of OHMSS, but made up for it by crying with laughter at the end of Moonraker ("I think he's attempting re-entry!")

(It turns out that Austin Powers 2 has completely ruined me for this one, and it was only a superhuman effort of will that kept me from yelling out "JOHNSON!!" in the middle of NFT1.)

I thought we'd have up to an hour's interval between films for a coffee and a chat. As it turned out, it was all a bit of a rush. There certainly wasn't time to eat, and if Hannah hadn't given me half a Scotch egg and some Milkybar Buttons I would probably have died.

We did manage to visit the bar in preparation for The World Is Not Enough. I filled Hannah in on the rules of the Pierce Brosnan Drinking Game, and we clinked our plastic pint glasses as the lights went down.

One is a lot more forgiving of all the innuendo and horndoggery in Moonraker than in TWINE, partly because everyone should have known better by 1999 and partly because Roger is Roger while Pierce always has a slight aura of sleaze about him (sorry, Pierce). But there's lots to enjoy in the Millennium Bond Film. Just not always in the way the producers intended.

We made our exit during the end credits and headed back to Waterloo.

I was so excited about having met an actual Bond that I couldn't sleep. 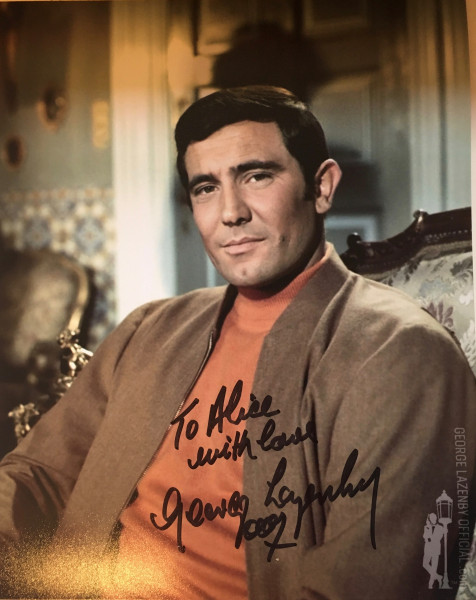