I started my day with a swim in the hotel pool, followed by an expedition to the local supermarket to sort lunch, dinner and the next day's breakfast.

We headed to the old town in the centre of Strasbourg, just to take a look, finding the old houses and cathedral pretty but not worth stopping for.

It turns out it can be tricky to leave the centre of Strasbourg once you're in it, but eventually we exited the one-way system and found ourselves heading back across the Rhine to Germany.

Our objective was the Schwarzwaldhochstraße, a scenic driving route high up, as the name suggests, in the Black Forest.

It's just thirty miles long, but gorgeous: straights and curves flickering in and out of pine forests, with panoramic views over the mountains.

We stopped at the Mummelsee, a deep lake nestled in the woods. It's a popular tourist destination, with a hotel, souvenir shops and pedalo hire, and we ate our sandwiches at a picnic table before setting off around the lake.

Luckily, Howard had perused the route in advance and advised me to take my swimming-costume. Nobody else was in the water, except in a pedalo, and we looked for a sign to find out whether it was allowed, finding one that warned the water could be deceptively cold and you swam at your own risk. Obviously whoever wrote it had never been to Brighton.

I waded in, watched with interest from the bank by other tourists.

"Ist kalt? Ist kalt," one observed as I found a steep bit and was forcibly immersed.

It was lovely, of course. I swam up and down within a safe distance of the bank, filling my senses with the surroundings so I'd remember it afterwards.

Once I'd dried off and bought a couple of postcards, we continued until the route's end in picturesque Freudenstadt. Here Howard had a slice of Black Forest gâteau that was mostly cream and I had a ridiculous ice cream with pineapple wedges and an actual leaf stuck in it.

I had time for another swim in the hotel pool before our dinner of bread and cheese. 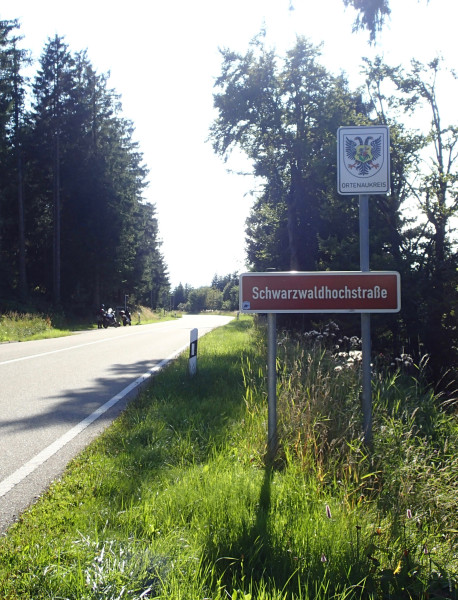 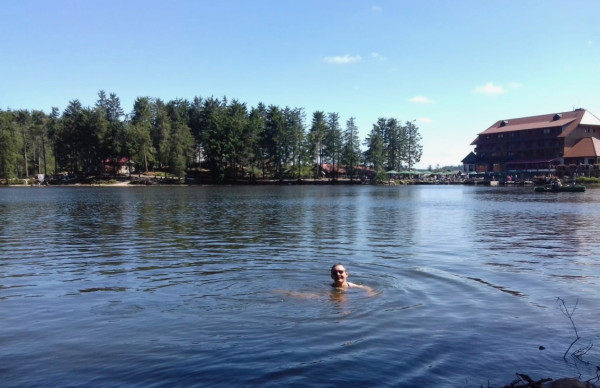