A leisurely start, in which we wandered into Bruges for a breakfast of Nutella waffles and coffee. As the carillon played Bohemian Rhapsody, we climbed into a canal boat for a low-level tour of the city.

The guide did a very good job of pointing out the sights in English, French and German. At one point I thought he was showing us some 'typical 17th-century gay bars', but to my disappointment Howard corrected me to 'gables'.

The previous evening, I'd spotted a cavernous souvenir shop promising a 'Tintin Chapel' on the 2nd floor, so I went in to pay my respects and purchase a couple of postcards. Then it was time to load up the bikes and head off.

We paid a quick visit to the outskirts of Brussels so Howard could see the Atomium, then left the motorways for smaller country roads. At one point we trundled across a level crossing, then over a bridge into a town so picturesque I felt quite spoilt. In the early evening, we arrived at our destination: Bovigny, in the district of Gouvy.

On a day trip to Brussels with @wardy a couple of years ago, we spotted and admired a tin sign advertising Lupulus beer. (Lupulus is the Latin name for hops, but also means 'little wolf'; cf 'homunculus'.) Quixotically, I added the brewery to the To Visit list. This trip, it made sense to stay in a nearby hotel on our way east.

It turned out to be an excellent pick. Our hotel, chosen because it was within walking distance of the brewery, was charming, with a friendly proprietor, geraniums in the window-boxes, and two soft-looking deer in a grassy enclosure. There was even a bath, and I took grateful advantage of it, since the later stages of the journey had been a little cold and wet.

The timing of our trip didn't make a brewery tour feasible, but we walked to the Lupulus brasserie, where I had an outstanding meal of salmon in a sauce made with their Blonde beer, and a sorbet made from their fruit beer. This came with a Lupulus-branded cocktail umbrella, which I pocketed, along with a beermat or two.

The bill was a little high, but then we did buy a T-shirt each.

(Wolf: model's own. Her name is Ingrid Bergwolf.) 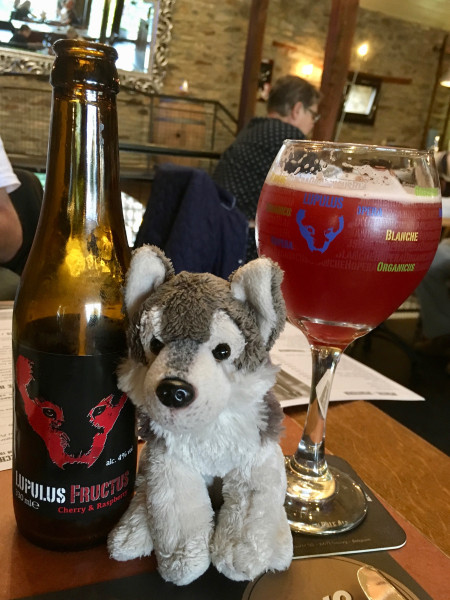