The BFI's Cary Grant season continues apace, and I have been taking full advantage of it.

It's another light, frothy romcom, in which Cary Grant has been silly enough to fall for the wrong wealthy sister. The question is never if he will end up with Katharine Hepburn, but how it will be achieved with everyone's integrity intact.

The experience was made even more enjoyable by the knowledge, gained at last week's talk, that Grant spent time as a circus performer, which explains the great scene where he sneaks away from the posh New Year's Eve party to do some acrobatics with Hepburn (not a euphemism) in the playroom (also not a euphemism).

On Wednesday it was time for the 4K restoration, whatever that is, of Notorious, 'the greatest sexpionage movie of them all', seen, appropriately enough, with my friend who reviews crime fiction for the Telegraph.

Grant plays Devlin, a police officer who persuades Ingrid Bergman's daughter-of-a-war-criminal to infiltrate a gang of Nazis in Rio by seducing one of their members, while being sad that she agrees to do it because that must mean she's a slapper. (Double standards; you can bet Devlin sleeps with anyone he needs to in the course of his duties.)

This is a Hitchcock film, and it shows in the lighting, the composition, and the incredibly slow suspense (watch agog as it takes several minutes for a wine bottle to work its way to the edge of a shelf and fall off). We both failed to spot Hitchcock's cameo, but I looked him up this morning and he was 'Man Drinking Champagne At Party'.

It's difficult to hate Claude Rains as the bad guy, because you can't not think of him as Bogie's French policeman pal from Casablanca. Leopoldine Konstantin, playing his mother, was a wonderfully funny and evil supporting character. We checked afterwards and she was, er, three years older than Rains.

My friend was held up on a bus and arrived late, and the film moved to a different screen with unallocated seating, meaning we didn't end up sitting together (it was a sellout house). We found each other afterwards and dissected the movie over flat whites, because we'd been watching Rains and Konstantin drug Ingrid Bergman's coffee and it put us in the mood. 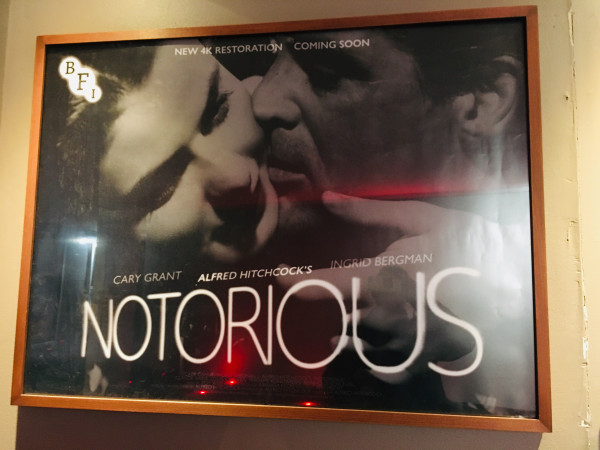