Last night I dragged a friend to the BFI for Only Angels Have Wings (1939), or, as he described it, 'your Cary Grant aeroplane movie'. I enjoyed it just as much as you're imagining I enjoyed Cary Grant in a Howard Hawks film about pilots, and possibly a little more.

The suspense comes not from whether Cary Grant will get Jean Arthur, because duh, but in who will live and who will die among the men running a shoestring airmail operation out of a South American port.

Flying the mail between the wars was a risky occupation (see Antoine de Saint-Exupéry's Southern Mail), in which you must constantly weigh up current and future weather conditions against the need to get the mail through in a timely fashion. The planes flown by Barranca Airways are too old and underpowered to climb over the mountains, so they have to aim for a narrow pass often rendered impassible by cloud or condors.

The flying scenes and model work are surprisingly effective, but it's the stuff on the ground, with everyone pretending to be hard and callous to mask their true feelings as their friends set off into the storm, that makes it. 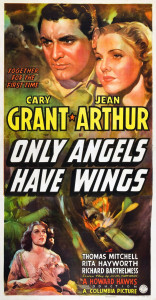