Yesterday I travelled to Oxford for the 30th anniversary of the Oxford Doctor Who Society, which I joined when it was six years old and known as OU Who.

I don't revisit my alma mater very often; it's not that I didn't have a good time there, more that it is so very much its own particular time and place that I prefer to keep it locked in its box. So it was strange to ride down the Banbury Road, past my old college and the spot where a motorist once threw a baguette at me as I was cycling, park on St Giles and immediately see the Oxfam bookshop where it always had been and where I had not given it much thought since 1999.

parrot_knight, who had to spread himself pretty thinly because he was the only person a lot of people knew. Luckily everyone was very nice, and nowhere near as aggressively young as I'd feared.

Katy Manning (Jo Grant) had been invited but was unable to attend. Instead, she had recorded a video message for us which captured her lovely, bubbly spirit perfectly.

John Leeson, the voice of K-9, couldn't make it either, but very kindly offered to send a signed photo to anyone who wanted one. (How did he know to sign mine 'Tailwags'??)

parrot_knight gave a presentation on the history of the society, which made me feel as if I was part of something important and historic rather than just someone who spent most Monday evenings of her student career sitting in the dark watching videos.

There was a quiz, for which I teamed up with

daniel_saunders and we did OK (by which I mean he did OK; I was useless). There were screenings of The Doctor Who Years: The Seventies, which combined clips with songs that were charting at the time and was very much to my taste, and the first episode of the animated Wheel in Space. Then there was a group photo, and then it was time for me to head home.

I owe DocSoc a lot; I wouldn't have seen nearly as much Who as I have without it, let alone other offerings like Blake's 7 and The Prisoner, nor met several of my friends. I'm glad it's still going, and taking itself just as seriously as it always has. 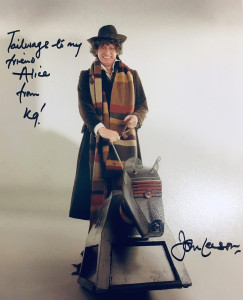 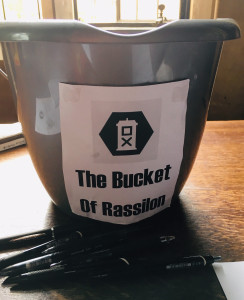