Lori had to go to work, but returned in time to take me for a farewell meal at the Mount Airy Tavern before driving me to the airport. We had nachos and cocktails, and a friendly waitress asked me about my stay in Maryland...and, inevitably, about Brexit.

When it was time for us to leave, we saw she'd written 'Have a wonderful flight!' on the receipt.

"Nearly there," said Lori an hour later, as we passed a sign for Baltimore–Washington International Airport.

"I'm flying from Dulles," I reminded her.

We arrived with an hour to go before my flight took off. Our goodbyes were hasty, but heartfelt.

While my entry into the country had been forbidding, my exit couldn't have been nicer.

“I love your bag! Is that James Bond? You’re a Brit, right?” exclaimed the man whose job it was to help me put my possessions through the x-ray, admiring in turn my aeroplane-print rucksack and my phone's lock screen.

I took off my shoes, jacket and hoodie for security, but set off the scanner by having a roll of Candy Money in my pocket and had to be frisked by a nice woman originally from the northwest of England. During the process she lifted my watch and found my 007 tattoo: “Okay, Special Agent James Bond," she said delightedly. "No wonder you were armed.”

I had a row to myself on the flight, during which the captain called our attention to the spectacular view of Manhattan on the left (my!) side. I watched Wreck-It Ralph 2 and ate dinner, spent half an hour trying to sleep then got bored and watched Casablanca. Before that was over, the cabin crew had put the cabin lights back on and woken everyone up for something they claimed was breakfast.

We arrived ahead of schedule and emerged into the grimness of early-Sunday-morning Heathrow. As I waited in Arrivals, who should I spot but my Welsh friends from the convention, who had been on the same flight?

Then Howard appeared, holding a sign in case I didn't recognise him and bearing Marmite crisps in case I needed an emergency dose of Britishness.

I had an amazing time in the US - full of new experiences, old and new friends, and furries two- and four-legged. I made memories I'll always treasure. And it all happened because I write stories with talking animals in and am pretty publicly into James Bond.

The lesson here, I think, is to be you, do what makes you happy, and with luck good things will follow. 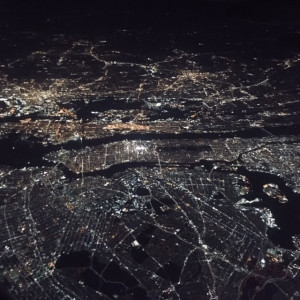 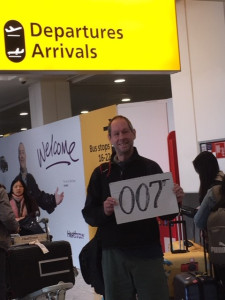