At breakfast I talked to a couple from Wales who, it turned out, had the room next to mine.

I spent much of my Sunday rushing from panel to panel, thanks to the superb effort put into the writing track by its lead, Jaden Drakus. Mid-afternoon I paused for another VIP event: the Ice Cream Social, which allowed me to chat with sponsors and the hard-working con staff while eating Rainbow Sorbet covered in chocolate sauce, M&Ms and squirty cream.

My final panel of the day was also the final panel of the entire convention. At its end, I had to rush to get backstage for the closing ceremony, at which I had to say two lines and pull a name out of a hat for next year's Attendee Guest of Honour. To cheers, the staff revealed the theme for Fur the More 2020: SPACE!

The audience was invited to stay behind if we had feedback to give. My feedback was a box of Milk Tray and my heartfelt thanks.

Furry publishers Sofawolf Press, for whom I do a bit of slushpile diving, weren't able to attend the convention, but they had very kindly instructed one of my writer friends to take me out to dinner on their dime. So seven of us piled into two cars - Jaden Drakus, TJ Minde, Skunkbomb, Mog Moogle, Camio, Matt Fox and me - and headed for a nearby Japanese restaurant.

The restaurant was clean and comfortable, with a friendly atmosphere. The company was fantastic and the sushi was the best I've ever had: TJ and I split an 'Orange Trio' of assorted fish on rice and the 'Ultimo', which had gold flakes on top.

(We tried to be furry trash and order a sake called 'Otter Fest', but they'd run out.)

It was a quieter evening after a hectic day, and one of my happiest memories from the trip.

Afterwards we went back to someone's room and recorded a podcast, which is always a great idea after sake. 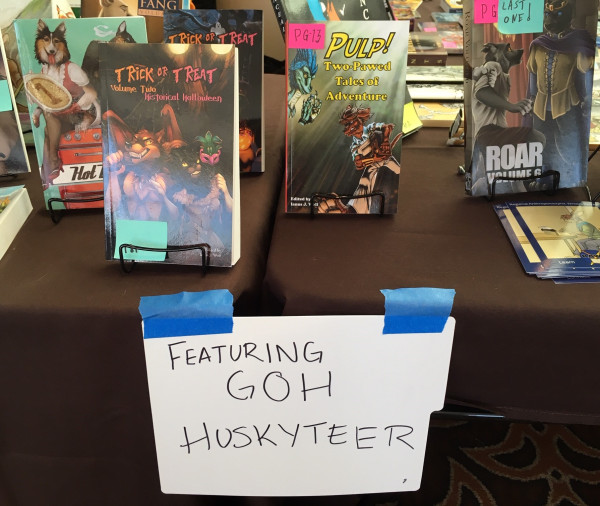 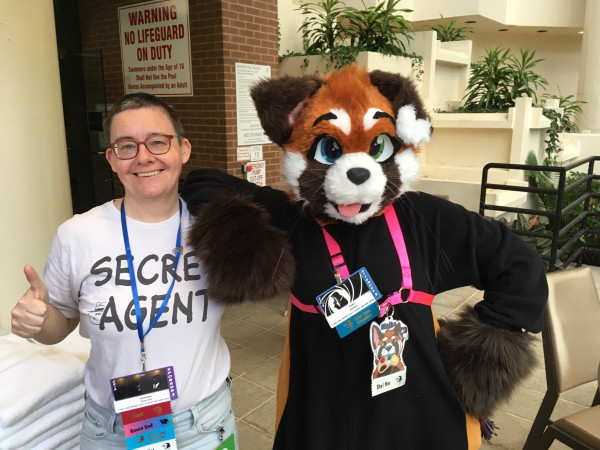