Did you know that you can tour the Pentagon? I did, because I am a nerd.

I put in a request several weeks before I travelled, so they could 'conduct background checks' (which presumably didn't include looking at my Twitter), and received an email the night before my holiday started to say I had been approved.

On the appointed day, John and Laurie dropped me off at the Kiss & Ride so I could take the Metro to the Pentagon, which has its own dedicated station.

While I was in the queue to enter the building, I discovered that when I thought I'd grabbed my passport out of my bag to use as ID, I had in fact only grabbed the cover. It’s a very nice Cath Kidston cover but it is not ID. I sweated bullets in the queue, then they let me in on my driving-licence without a second glance and it was off to airport-style security. I was given a purple ESCORT REQUIRED visitor’s pass and sent through to the waiting-room, where I took a cheesy photo, bought the tackiest T-shirt the gift shop had to offer, and chatted to a nice family from Houston who wanted me to explain Brexit (I got this a lot).

My tour group was led by a lovely young member of the US Navy Ceremonial Guard, who had to walk backwards in front of us while delivering a precis of American history. I, at least, was more interested in the signs on the office doors we passed and the military personnel walking by with coffee cups than in Dwight Eisenhower’s contribution to the interstate system, though my hand shot up when she asked "Can anyone tell me who the Tuskegee Airmen were?"

We walked through a tiny mall with generic shops labelled things like BANK and CLOTHIERS, passing restrooms and drinking-fountains we weren't allowed to use, and spent a few quiet minutes at the memorial to the employees and emergency services personnel who died in the 9/11 attack.

In all we pounded the corridors for a mile and a half (there are 17 miles of corridor, fact fans) before being funnelled back into the Metro at the end of the tour.

I got off at the next stop, Pentagon City, and walked under the interstate to the Air Force Memorial (they told me at the Pentagon I’d have to take an Uber, but who’s gonna believe anything the Pentagon tells ‘em). Overlooking the city near Arlington Cemetery, this is a trio of curves like the trails of jets in a vertical climb. It's simple, elegant and moving, and I looked at it from every angle as well as enjoying the view of the Washington skyline.

On the way there I somehow tripped over a kerb, tore my favourite jeans and skinned my knee, which is what happens when I’m allowed out unsupervised.

Back at the home Metro station, there were some small girls selling Girl Scout cookies. This was such a classic American thing that I couldn’t resist and bought a box of Do-si-dos (which went down very well at the office).

Laurie picked me up and we headed home for another American institution, the cookout - or ‘barbecue’, as we call it in this country. 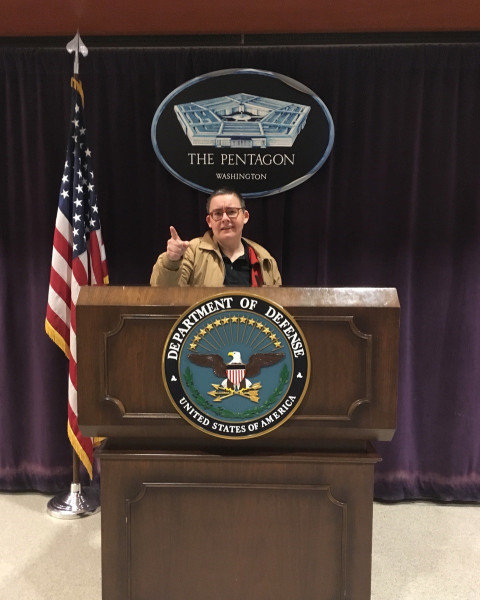 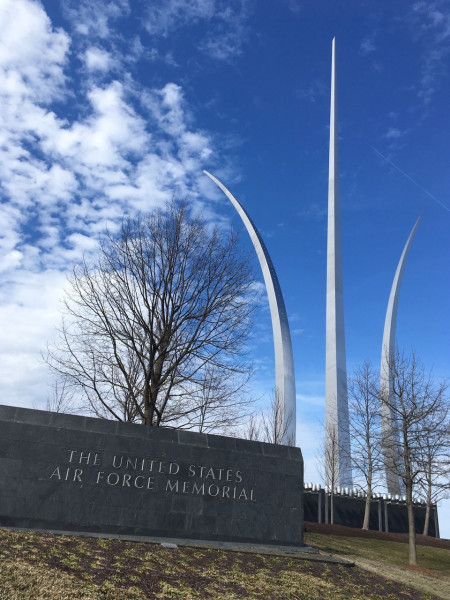 Today I'd arranged to meet up with an online friend from the Bond forum, who collected me from John and Laurie's in his car with the QBRANCH licence plate and took me out for Starbucks. On the way, I explained how I had come to be in Washington and the nature of the convention.

"It makes sense you'd be into that," he said. "You're so positive!" Which was nice, and not what most people have to say about furries.

We spent a couple of hours discussing all things 007 and finding out about each other's lives, then he dropped me back and disappeared into the rush hour.

From tonight until Monday morning I was booked into the convention hotel. This was a short drive from my hosts' place, with a stop at the Silver Diner so I could enjoy brined fried chicken with sausage gravy and a pecan waffle.

Then I was hurled into all the excitement and confusion of a furry con, with friends greeting friends and fursuiters offering hugs to all. I was delivered to Sparf, who would be my main point of contact and was the driving force behind my invitation, got myself registered, and received a sponsor pack full of gifts.

Being Guest of Honour entitled me to the VIP package, which included an extremely on-theme selection of swag, all branded with the con logo: a martini glass and cocktail shaker, an umbrella with a torch in the handle, a pen that is also a USB stick and laser pointer, and another pen with a compass, screwdrivers and flashlight.

I unpacked, returned downstairs, and was embroiled in earnest Best Bond discussions 10 minutes later. John had created the design for the conbook cover, which featured my fursona, and I wanted to tell everyone I saw carrying the book that IT ME.

Back in my 21st-floor hotel room, I had a bath then stared out of the window at the cars on the flyover, reflecting on the strange and wonderful circumstances that had brought me here.