News! My insurer has declared my stolen-and-recovered bike a total loss and agreed to pay me what I paid for it, minus my excess. Bit of a waste of a bike, but the best possible result for me.

To celebrate, on Saturday I went on a bike forum rideout to the de Havilland Aircraft Museum. We met for breakfast at a greasy spoon near Potters Bar (an important part of any biking event), then had a short ride on the back roads to the museum.

Based at the old de Havilland factory, this was for a long time the only museum dedicated to aircraft made by a single manufacturer. It takes us through the First World War, the heyday of light leisure aircraft like the Hornet Moth, with its special space for your golf clubs, to the Mosquito, the Second World War's 'Wooden Wonder' (with parts manufactured by G Plan and Parker Knoll, it was known as the best piece of furniture ever made in Britain) to postwar jets like the Vampire, the ill-fated Comet airliner, and finally a few examples from the period after the firm became part of Hawker Siddeley.

We opted for a group tour and learned lots of amazing facts we wouldn't otherwise have discovered. DID YOU KNOW, for instance, that there was a Tiger Moth variant called the Queen Bee? Remote-controlled by telephone, it was used for gunnery practice and is the reason unmanned aircraft are called 'drones'.

After a coffee, most of us went back to look at the bits we'd been hurried past. I was, predictably, the last to leave, having hung around photographing my bike next to the Dove in the car park. 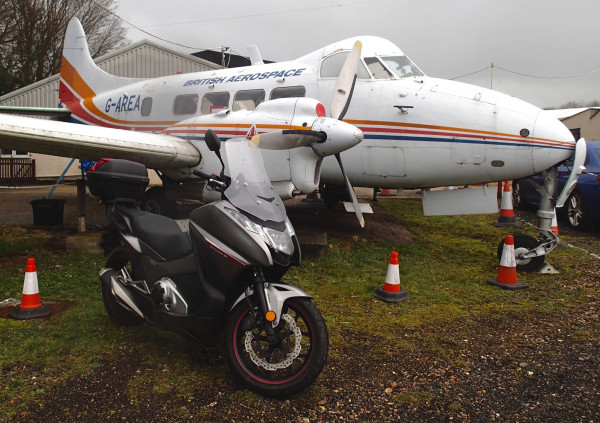