This morning I was going to participate in a fine Berlin tradition, at the suggestion of a friend from the Vespa forum: brunch!

Arakin and I joined my scooting pal at her chosen café, and made our strategic choices from the vast buffet, where breakfast foods rubbed shoulders with macaroni cheeese and all the components of a roast dinner.

I had a first round of scrambled eggs, bacon, smoked salmon, cheese and a bread roll, then returned for curry and rice plus a few potato croquettes because I really like potato croquettes, wrapping up with a mixed bowl of rice pudding, custard, apple puree and fruit compote.

Arakin and I strolled back to the station past the city's own Bob Dylan tribute busker, who was deep in A Hard Rain's A-Gonna Fall, and headed for another great Berlin institution: the flea market at Mauerpark, where I inevitably bought a stupid army surplus hat that would make all my Berlin-based friends roll their eyes at me when they saw it. My head was cold. That's my excuse and I'm sticking to it.

After this we visited the free Berlin Wall Memorial, dedicated to life on both sides of the Wall and the people who escaped, or failed to. There's a recreated section with the 'death strip' and a watchtower, which looked suitably creepy in the fading light.

The evening's wandering took us close to Checkpoint Charlie, where I was able to tick off another Living Daylights location: the corner of Kochstrasse and Wilhelmstrasse, site of the block of flats from which Bond shoots at the KGB sniper.

Then into the warmth of the Rausch chocolate shop (featuring such wonders as a chocolate model of Berlin's TV tower) and café, where we were joined by Rob. Choosing from the extensive cake and hot chocolate menu was tricky; I went for a chilli hot chocolate and a "gentleman's little cake", a concoction of dark chocolate and apricot jam. 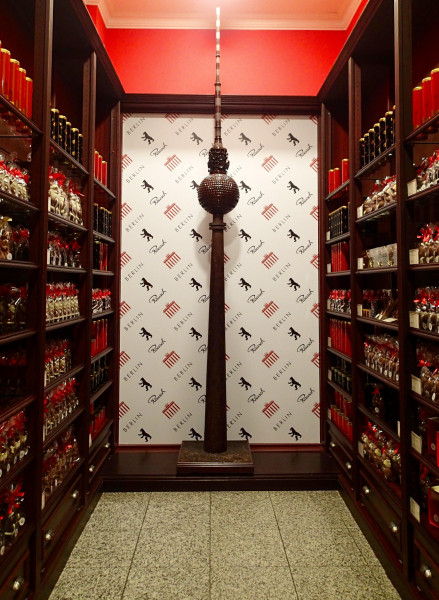 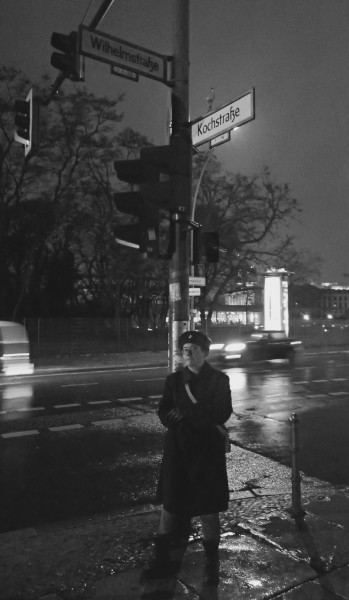