I fell in love with Berlin on my first visit in 2016, and I'd been looking forward to going back ever since. Last weekend I once again took advantage of Arakin's good nature, and sofabed, for a four-night stay.

Although I spent the journey to Stansted worrying about whether I'd miss the plane, or if I had in fact made a mistake and booked a flight on a different day entirely, everything went smoothly. The flight landed ahead of schedule and I got very excited about spotting the Teufelsberg listening station from the air.

(On landing, I saw an Aeroflot plane named the N. LOBACHEVSKY. When I told Arakin about this he immediately knew why I'd thought it was funny, and we spent much of our evening watching Tom Lehrer videos on YouTube, which is just one reason Arakin is a quality friend.)

I met Arakin for lunch near his office and he relieved me of my bag so I wouldn't have to carry it around all afternoon. Then I headed into the centre of town and the DDR Motorcycle Museum.

I'd heard of MZ and Jawa, but most of the marques on display were new to me. There were smart police escort bikes, sinister military machines for patrolling, and jolly mopeds capable of taking the whole family plus luggage for a healthy holiday at the seaside. I quite lost my heart to IWL's family of scooters - just look at them!

There was time for a quick visit to the Humana secondhand clothes shop, where I bought an orange shirt, before getting on the tram to Arakin's place. He and I converged on it simultaneously from different approaches, which was handy.

A short time later we were joined by my furry writer pal Rob, and the three of went out to dine at Zur Haxe, home of a large collection of plush animals alongside very traditional German cuisine i.e. ALL THE MEAT with ALL THE POTATOES and also CABBAGE.

I ordered Leberkäs even though neither of my companions could adequately tell me what it was:

Luckily, it turned out to be more like a large, flat frankfurter, and delicious. 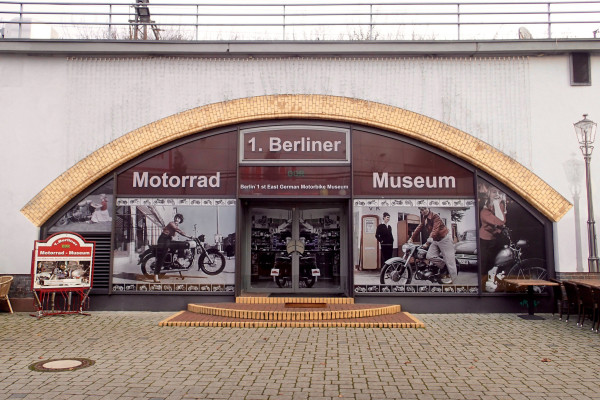