On Saturday, I headed to the Royal Albert Hall for something pretty special: a screening of Casino Royale (2006 flavour) with live score by the Royal Philharmonic Concert Orchestra.

The place was filled with happy, excited Bond fans from all over the world; I heard a group of Scandinavians in the lobby having a very animated discussion of which I understood only 'Timothy Dalton'.

An email from the venue had stated that the dress code was '007 inspired', and there were plenty of attendees in black tie, putting my SPECTRE polo shirt to shame. I saw Thunderball and A View to a Kill T-shirts, and a tiny little boy in a tux (I hope he enjoyed the torture scene).

Before the screening there was a Q&A with composer David Arnold, in which he talked about his love of Bond and his experience writing the scores for five Bond films, from Tomorrow Never Dies up to Quantum of Solace. Then it was into the action.

I didn't realise quite how much the live music would add to the experience, but it was wonderful to hear and watch. Seated in the circle, I was almost above the conductor; I could see the small screen in front of him showing the movie and electronic cues, and catch the subtle movement he made as he geared up for the swooping 'Vesper' love theme.

My favourite thing to watch, though, was one of the violinists, who was turning his head to enjoy the film every chance he got.

I also loved the gusto with which the orchestra swung into the Bond theme over the closing credits, accompanied by David Arnold on guitar.

No effort had been spared to make it a tasteful and memorable occasion. Aston Martin had even sent along a DB5, which was sitting smugly outside behind ropes. Everything was just lovely, including a custom INTERMISSION screen with the O forming part of the 007 logo. 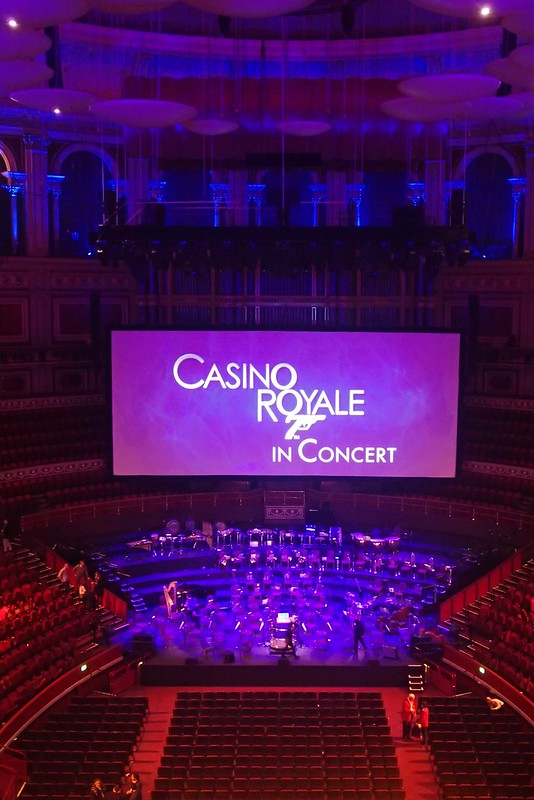