Today we would travel from France into Spain, via the Col d'Aubisque. Which turned out to be closed for roadworks, a fact helpfully signposted three kilometres beforehand.

There are only so many ways through the mountains. We rode all the way back to Lourdes and out again along a different route, stopping at a petrol station to gird loins and empty bladders for the long slog ahead. I attempted to raise everyone's spirits by handing round my BN biscuits, with varying success.

Towards the middle of the day we found ourselves back on track and up among the mountains. When we emerged from the pass, we were in Spain.

We stopped near the border for a late lunch of tapas in the sunshine, entering a bar and pointing inquiringly at the food on display. We didn't fully understand the reply, and ordered one of everything regardless.

The afternoon's roads were gorgeous, with wide, sweeping bends and views of brilliant blue lakes. The highlight, for me, was seeing the rest of the group going in the opposite direction to me along one shore of the lake, while I waved from the other.

It was hot, though.

In the early evening we entered Logroño and wound through the streets to our hotel, which had a vehicle lift for access to the garage. This fitted four bikes at a time and was pretty exciting.

In the wonderfully cool reception, we were greeted by a brace of Tintins on the front desk. (The one on the right is a pilgrim; you can see his cockleshell.)

Checked in and showered, we went out on the town and I wondered why I hadn't been to Spain before. Everything is cheap and they truly understand the importance of the olive. 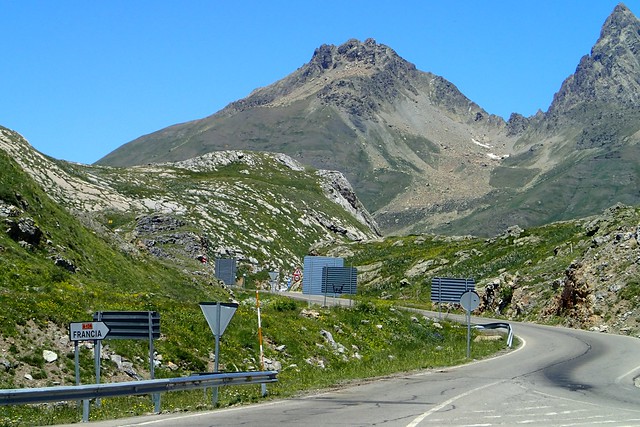 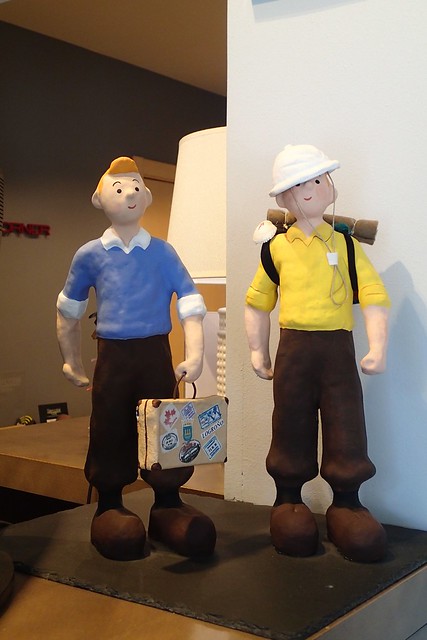 On the last stretch the day before, I'd noticed the signs at the side of the road for the Camino de Santiago, and distances to Santiago de Compostela in kilometres. Today we continued on the pilgrims' route, past flat-topped mountains and fields of flowers.

We stopped in a town with storks nesting on the church, and I bought a huge jar of olives for €2.50. When we moved on, it was along a road carved through vivid red earth, with a white half-moon hanging above a wind farm and a line of lorries carrying tracked vehicles waiting to enter a military base.

High peaks showed pale in the distance. Were these, finally, the Picos we had come so far to see?

Just before lunch we stopped for petrol, and I discovered my favourite thing about Spain: when you enter your PIN in a card reader, it reports 'NUMERO SECRETO CORRECTO'.

After sandwiches in a baking hot town, we entered the mountains proper. We passed through villages, each with a set of traffic lights outside to ensure you slowed properly. One set of these seemed to have been placed purely to showcase the view of a lake over to the left, and at another a large green lizard scurried across the road ahead of me. Then we left habitation behind, and there was only the narrow, twisting road and the rocks.

We pulled in to a layby to take in one of the most incredible views I have ever seen. I have no adequate words. Please enjoy: 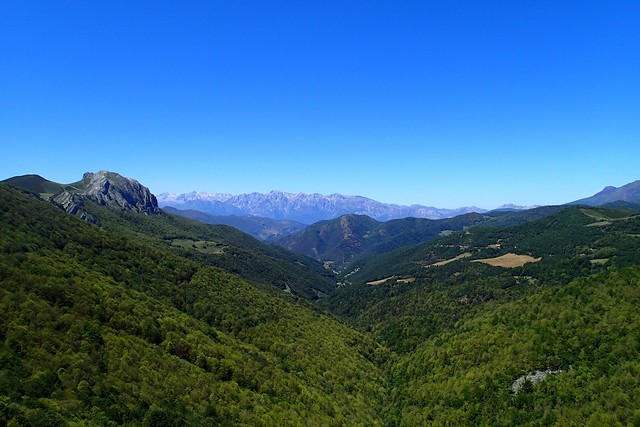 We had been promised a surprise in the afternoon, if we didn't mind a slight diversion. I was delighted to learn that the surprise was the Fuente Dé cable car - I love a cable car - which took us to a spot from which we could admire Alpine choughs above and the tiny dots of our bikes in the car park below.

There wasn't room for our entire party in one car, and Jen and I ended up sharing the next one with a group of tiny, elderly Spanish women on their pilgrimage.

("You must feel really tall!" said Jen. "You should move to Spain!")

Back at the bikes, one of the group asked me if I had any biscuits left, as her diabetic husband had just tested his insulin and found it low. So my BNs averted a potential medical emergency!

The last part of the journey took us up high, into the heart of the Picos de Europa National Park. Signs of civilisation were far between and I spent a good half hour with no other riders in sight. I felt sure that the ride had been far longer than the distance and timing we'd been told before we set off, and was panicking slightly about missed turnings and vanishing into the dusk with no phone signal, when a petrol station came into view and with it a marker. A minute later, I was joining the other bikes in the hotel courtyard.

The hotel featured views over the lake - actually a reservoir with a flooded village beneath it - and a gorgeous Chow, whom I greeted in the correct manner i.e. "HELLO ANGEL PIE!!"

We were given a wonderful meal, after which I stayed up until 1am drinking and talking about aeroplanes. 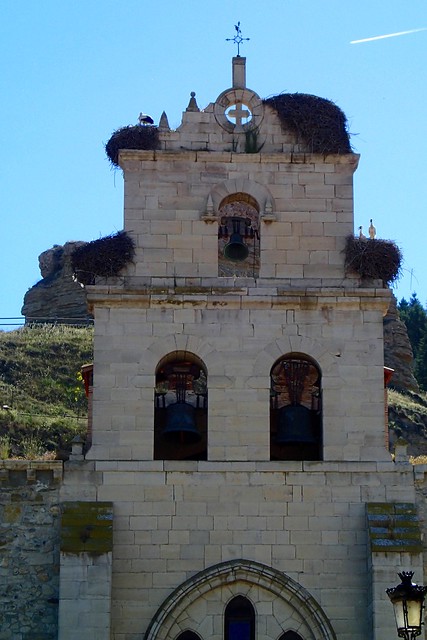