We set off into a humid, threatening morning. Within an hour it had become so threatening that we stopped in a layby to put waterproofs on. Minutes later, as we waited to turn right at a T junction, jagged lightning lit the black sky ahead and a sinister boom of thunder echoed round us.

For the next few minutes, the rain was the kind that bounces back up off the ground and runs across the road in streams. But on a warm day, tucked up in waterproofs, slogging through it in a group was a cosy and companionable experience.

By the time we stopped for lunch, it was sunny and hot again. We were not yet in Spain, but got ahead by choosing a tapas bar. The service was slow but the food delicious and the waiter very kind, and when I thanked him as we left he said “Non, c’est moi qui vous remercie!”

A long, hot stretch followed. This was Gascony, where the town names end in -ac. Few junctions meant few markers to collect, and I travelled alone. I stopped to photograph d'Artagnan's birthplace, Lupiac (the real-life d'Artagnan; the one in the novel was born in Béarn, of course), and again to wipe the yellow remains of an enormous insect, the type known in biking circles as a ‘custard fly’, off my glasses.

At the eventual, welcome tea stop, a French gentleman examined the bikes, lined up in the town square, and asked me about mine. We had a conversation in Franglais about mileage, then it was time to depart. Seeing the aeroplane keyring I'd bought several days and hundreds of miles ago, my new friend observed "Your bike is solid, like the Dakota!"

We approached Lourdes through flatlands, past kites circling on the thermals, and entered the old town, along the river, where the hotels are named after saints.

We had been under the impression, the previous day, that Rocamadour was a bit on the tacky and touristy side. To which Lourdes, in Twitter parlance, said 'hold my beer'. I was pretty tempted to buy a plastic water bottle shaped like the Virgin Mary, but I resisted. 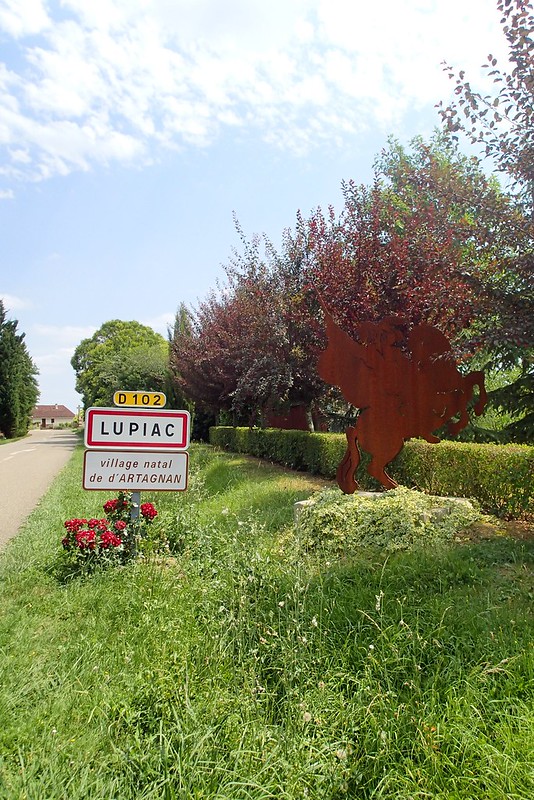