I have been on holiday! I spent ten days touring the Pyrenees and Picos mountains in the capable hands of old friends BN European Tours.

Before the holiday proper began, though, I spent a night in a Hayling Island hotel enjoying an Egyptian-themed murder mystery dinner.

This was all very lighthearted, featuring as it did Lara Cruft, Indiana Bones, and a lot of audience participation as extra characters (who might or might not be murdered, or murderers).

I, typically, spent a lot of time letting 'I dare not' wait upon 'I would', and missed my chance. Another time!

Helped by the actors, we worked to piece the clues together with our tablemates, two of whom were lovely and had dressed up for the occasion (as had I), while the other four were a little standoffish.

After the mystery had been resolved, one of the troupe stayed on to entertain us with live singing. This included a performance of 'Alice, Who the Fuck Is Alice?', at which everyone at our table pointed and laughed at me.

"Oh, have we got an Alice?" asked the singer, launching into the refrain with renewed energy.

After sitting through that, I decided it was bedtime. And everyone in the room called "Goodnight, Alice!" as I left.

Here I am with a borrowed hat and Inspector Platform (of the Station). It was that kind of evening. 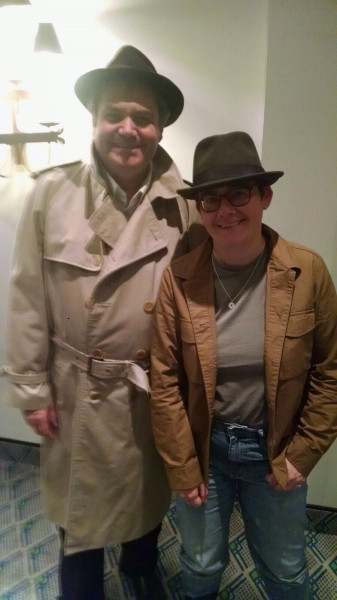 As we were preparing to leave the hotel in the morning, I found a hairpin in the car park and gave it to Howard in case it came in useful later. Remember this.

We made a brief tour of Hayling Island before catching the afternoon ferry to Caen. Before our bikes were even strapped down we had met and introduced ourselves to another member of our tour group, Phil. The three of us established a base camp with a view, and settled down for the crossing.

On arrival, it was a couple of minutes' ride to the night's hotel, the Ouistreham Ibis Styles. We arrived simultaneously with tour leaders John and Jen, in time for a drink before bed.