On Saturday I went paintballing at Go Paintball, round the back end of Croydon, for a friend's birthday. It will probably surprise many of you to learn that I'd never done it before, and I was terrified I'd be awful at it and cry.

Everyone has a pop culture paintball reference. A lot of people mentioned Byker Grove, but for me it's alway been the episode of Drop the Dead Donkey where George goes berserk on a team-building exercise and shoots Henry in the face.

Our group of six was split between the two teams of the day, Red and Blue. We played eight games over four different terrain maps, each with different objectives and things to hide behind. I was on Team Blue, and I'm happy to report we won. No thanks to me.

I was the first to be shot in the first game, which didn't make me terribly happy, but I was far from the last, and I soon got into the swing of taking cover and stealthy potshots. Not for me the heroic run to the target under fire.

What with that and a two-hour karate class on Sunday, it's a relief to be back in the office for a nice rest. 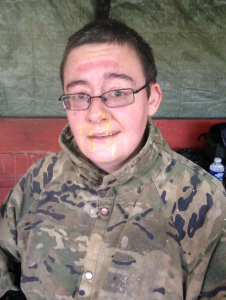