The last time I attended an all-night movie marathon was over a decade ago, but the Prince Charles dangled a James Bond All-Nighter in front of me and I heeded the call. The lineup, after all, very closely matched my list of top Bond movies:

I'd have picked Skyfall over Casino Royale, but one can't have everything.

I was a little unsure, on arrival, whether I was doing a sensible thing, but it turns out that when there's big-screen Bond on the menu I will happily stay up all night and love it. For everything up to Goldeneye, this was my first viewing in a cinema, which added to the excitement, and it was lovely to be sharing the reactions of >100 other people to films we, presumably, all knew and loved.

I'd never watched a film from each era back to back like this, and it was very illuminating on the evolution of the series and the continuity along the way. Goldeneye in particular draws on OHMSS in the ways it establishes that this new Bond is the same as the old Bond. The effect of an audience was energising, too, as we clapped each gun barrel.

Shortly after 11am I emerged into the West End's Chinese New Year parade, which felt very Bond-movie: struggling against the flow of oblivious, happy revellers to get somewhere important (i.e. HOME). I channeled Daniel Craig and behaved as if bad things would happen should I not get through. It worked. 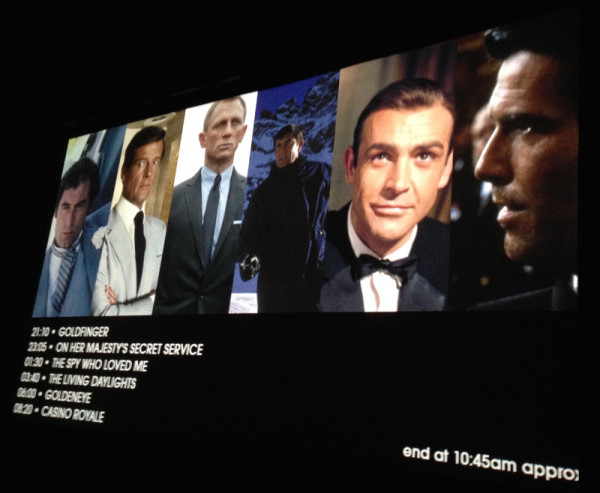