I took the tail end of last week off in order to see Paul Simon at the BIC on Thursday evening, and it was totally worth it, of course.

I went with my mum; incredibly, it was her first time seeing him live.

It was my sixth, I believe.

We had seats near enough the front for a good view of even the most diminutive singer-songwriters. The band, on their panoply of instruments, did a rousing instrumental 'Gumboots', then Paul bounced in and went into 'The Boy in the Bubble'.

I had my usual start-of-the-gig worries: he's losing it! his voice is going! the band's drowning him out! before everything settled down and became wonderful. Paul leaped and bounced and strutted, even making time for a little banter with the audience. The timeline jumped about from the '70s to the '00s to the '80s, but it was his first venture back to the and-Garfunkel era with 'America', my very favourite S&G number, that transported me and

callmemadam to a higher place.

What else did I love? Well, everything, but I'm going to mention 'Rewrite' from the last-but-one album, the bouncy 'Late in the Evening' from One-Trick Pony, and the instrumental 'El Condor Pasa' that segued surprisingly into 'Duncan'. Special mention also to band member Vincent, from Cameroon, who has been playing with Paul for 25 years; he's at least a foot taller than Mr Simon, and watching them play guitar at each other was incredibly sweet.

Several songs from the new album, including title track 'Stranger to Stranger', 'The Werewolf' (lots of fun with scary lighting and sound effects) and 'Wristband'.

"That song was called 'Wristband'," Paul announced at the end, "and this song is called 'Graceland'!"

There was a lot of Graceland, including 'You Can Call Me Al', to which everyone danced wildly, and 'That Was Your Mother', one of my favourites. That's because it is thirty years since the album was released. (I note from my writeup that I also saw Paul for the 20th anniversary.)

I see from the setlist that there were 28 songs, which is pretty incredible.

I bought this ridiculous souvenir of my evening, which will also come in useful should I find myself in some sort of emergency scenario requiring a metre of green string. 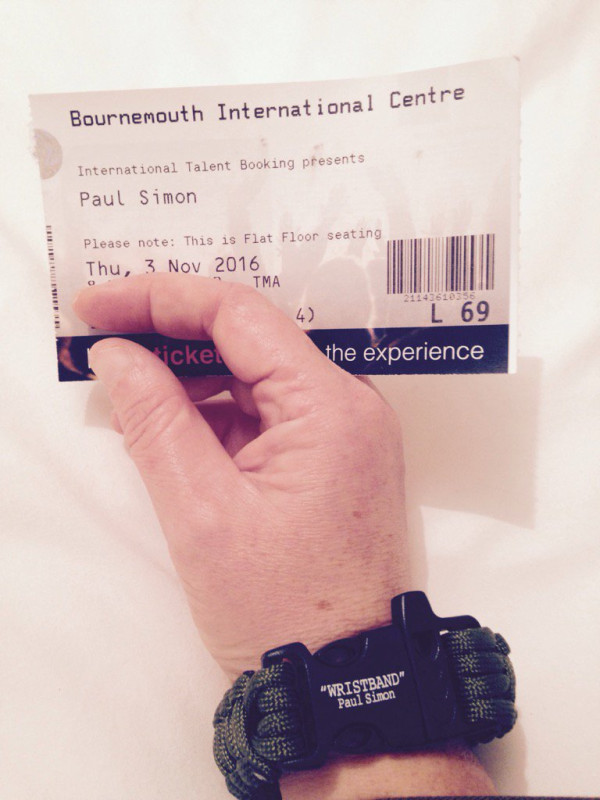