It's not easy to get twelve bikes rolling in the morning, particularly when there was home-made Calvados the night before and someone (not me) has left their ignition on and flattened the battery.

Eventually we were all on the road, having been cautioned that it was Le Mans weekend and the police were likely to be more interested than usual in misbehaving motorcyclists.

The weather continued to be glorious, and after a coffee stop we headed for a riverside restaurant familiar from previous visits. I recognised and liked the route to the river, which went from winding and sun-dappled roads to very narrow, twisty downhills as we approached our destination.

The riverside was busy with families and dogs, but there’s always room to park a motorbike, or even twelve. John had phoned ahead and reserved a table on the decking outside, overlooking the river. After lunch, Howard and I had a quick go on one of the yellow pedaloes before we set off again, working our way carefully out of the busy town and hitting the empty country roads with glee.

There was some excitement at the final coffee stop, when a couple of riders misinterpreted Howard’s marking and went sailing past the car park. Howard set off in pursuit, but on the wrong side of the road, so Jen set off after him. Soon everyone was safely sorted out and returned.

It was getting late in the day, we were tired, and dinner would need to be cooked on our return. But we had yet to do The Triangle: three stretches of excellent road, one of which is Howard’s favourite, a fast section of long straights and favourable bends known in Bike Normandy circles as The Racetrack.

The executive decision was that we would do two sections of the route, omitting The Racetrack. The first leg was fast, with plenty of opportunities to feel as if you’re leaning all the way over when in reality it’s a pathetic amount. At the end of it I found Howard marking a roundabout and looking pleased with himself. We did the home stretch in convoy, riding through woodland and stopping to admire the tank at the side of the road.

I was pleased to note at the end of the day that my Bridgestone T30s were at last showing signs of wear towards the outer edges. 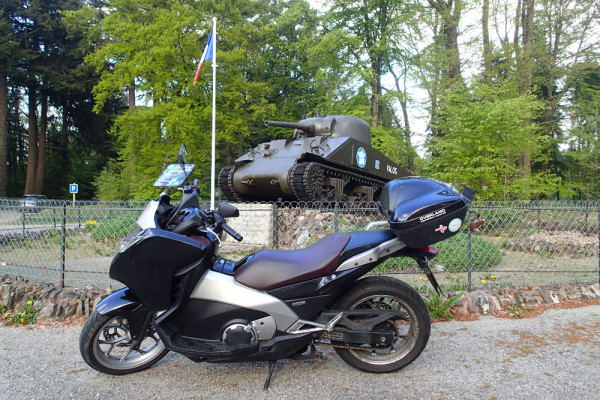