I started my morning with a quick swim to work up an appetite for the breakfast buffet, which took up most of a sizeable dining-room. There were bacon and eggs, dozens of breads, fruit, yoghurt, cereal, cold meat and cheese, pickles, smoked fish...OMG ALL THE THINGS. I had a cake course and a yoghurt-with-hundreds-and-thousands course.

(Later, I would be teased for devouring food at the coffee stop, and one of my tablemates would say in a motherly way that I hadn't had a very big breakfast.)

I should have explained earlier that John and Jen were sharing the driving of the van and a Triumph Street Triple. Today it was Jen's turn to drive the van and John's to lead by bike. We left the town by a different route, over the cobblestones, which seem much less charming when you're riding on them in the wet.

We had all donned waterproofs in expectation of heavy rain, and made an odd-looking but brightly-coloured group in shades of red and hi-viz orange. In fact, the worst we encountered was a few spots of drizzle and some damp surface, which did little to spoil my ride. These were the last few pretty bits before an afternoon of motorway, and I intended to say farewell to Germany in style.

Coffee was in Belgium, where there was enough rain for me to deploy the umbrella I'd been keeping in my top box. This always makes people laugh, for some reason. I was reunited with Howard, who had of course been keeping dry in the van, and we selected a nearby bar for our refreshments. I spotted saucisse on the snack menu for 2€ and ordered one. Very dry, but spicy and sustaining, for the record.

As we got up to leave, Howard very sweetly tried to buy the bar's Lupulus banner for me, but the barmaid was having none of it.

We had been warned that time was of the essence if ferries and tunnels were to be caught, so I plopped my bike off the kerb as soon as John set off. Unfortunately I'd been misinformed as to which direction we were setting off in, so I had to make an awkward U-turn. Soon afterwards, such was my zeal to be helpful and mark lots of junctions (also overtake lorries in urban environments), I sailed straight past the lead bike and only realised my error when I reached the next roundabout to find no marker. I went round again while I thought about what to do next, and reached the road I'd entered by in time for John to join in front of me and promptly drop me off as a marker at the correct exit. Even seeing a fighter plane parked on a Belgian roundabout (later identified online as an F-84 Thunderstreak) could not cheer me up.

I arrived at lunch convinced that I was riding really badly and John thought I was an idiot. This didn't stop me eating an enormous sandwich with 'americain', which I assumed would be cheese but turned out to be a mysterious and piquant orange spread. The internet suggests it was raw minced steak, but I'm pretty sure I couldn't have eaten that, so it cannot have been, or else the accompanying capers and pickles disguised it.

For the next stage, down the motorway, we were given printed instructions on junctions, distances and services. I was not feeling confident, even though both Jen and Howard told me not to be silly.

My piece of paper blew away before we even reached the motorway, so I was careful to stay near the front of the group. Even so, at a particularly complicated junction I found myself on a rapidly narrowing crosshatched area with cars attempting to change lanes on both sides of me. I was very grateful when we arrived at the Eurotunnel waiting area.

Here goodbyes were said and promises made to keep in touch. Some members of the group were staying another night in Calais, others were taking the tunnel, and Howard and I had a ferry to catch. Jen drove Howard, and all the luggage from his bike, to the port in the van, while I followed. On the way I saw two police officers looking down from a road bridge, and glanced their way to see the migrant camp spread out below me. A couple of days later I realised what the scene had reminded me of:

Howard boarded the ferry as a foot passenger while I rode round to the vehicle area. To my surprise I was waved on to the top deck, up a steep and scary ramp. Mine was the only motorcycle on the crossing, and I was left to my own devices to operate the ratchet strap but by some miracle managed it. We spent the short crossing gazing for'ard, enjoying a drink and a packet of crisps, and watching the sun set over Dover Castle.

As I waited by my vehicle for my turn to exit I spotted Howard in the foot passenger tunnel, but he didn't see me and my phone battery was dead so I could not, alas, text an urgent LOOK OUT oF WINDOW. Once safely back on dry land, I returned to the fifteen-minute car park where we had met at the start of the trip. Here, in due course, Howard appeared in the taxi arranged by his insurance company, and we said goodbye before departing separately for the M20.

I passed the taxi a couple of miles outside Dover, and soon afterwards, satisfyingly, made my last overtake of the holiday: Alan and Julie on their Multistrada, who had taken the Dunkirk crossing.

As soon as the M20 changed to the A20 I was almost taken out by a driver who switched straight from the slip road to the outside lane, which I was occupying. Thanks for the welcome, London!

I arrived home at a quarter to eleven, to be greeted by the same neighbouring poodle who had seen me off at the start of the trip. 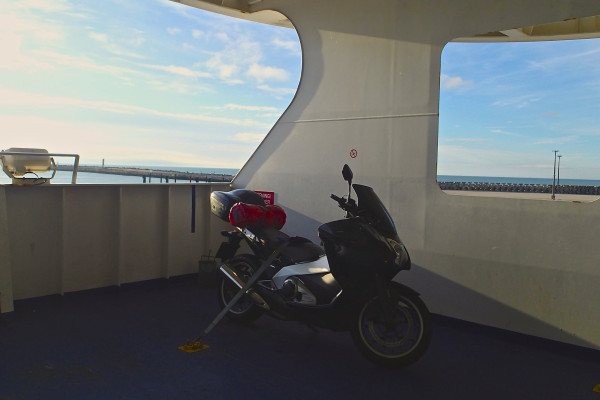