:(
A car driver pulled up next to me on my way to work in order to call me a fucking prick. I have literally no idea why.

:)
Then I got to the office and my colleague had brought me a brownie.

Another free day, but this time John and Jen were offering a short ride for those interested. I sorely needed to get back on my bike in a non-emergency scenario, so I went along in company with around half the group.

The day started with a river crossing on the ferry that departed not far from the hotel. Once on the opposite bank, we rode alongside the river, with views of a distant castle, then through a town and into the wooded hills, where, halfway through a bend, I saw a creature bouncing around in the grass and slowed to get my best ever look at a red squirrel.

A short stretch of motorway followed and the weather, fine and dry when we set off, took a turn for the chilly and misty. This was a pity, because our destination was a famous viewpoint, the Drachenfels. We took the little railway to the top, peered hopefully out at the cloud-covered, Wagnerian forests, and ate currywurst.

The journey back followed the same route as the journey out, and was just as pleasant in reverse. Jen was riding pillion with John, and turned in her seat to take photos of the bikes behind as we leaned through the bends. I enjoyed a brisk overtake of almost the entire group, only for my bike's intermittent fault to kick in necessitating an embarrassing stop to turn the ignition off and on again. Back on the ferry, I located the balcony of my hotel room across the river and waved to Howard as we approached.

This evening was the pièce de resistance of the tour: the Rhine in Flames itself. It's a festival of fireworks, with villages all along the river putting on displays. We were to enjoy a dinner cruise, culminating in a ringside seat at the climax over Koblenz Castle.

Soon, we realised that our 400-person craft was merely one component of a vast flotilla, and that the others had better music than us (we seemed to be on the all-ABBA vessel). Police and fire boats travelled among the cruisers. Soup was served, then a mystery meat I helpfully translated from the menu as veal.

The first fireworks went off along the banks, and there was a scramble for the deck. John, taking his responsibilities as tour leader seriously, led me by the hand through the crowds so I could get a good spot:

"Move down the bus, please. Coming through. Got a child here, it's her birthday."

Red lights lined the river, and music drifted across from the other craft. We travelled under a bridge and came to rest with our stern towards the castle, causing a rush of passengers from the front to the rear deck. We stayed where we were, relishing our newfound elbow room.

Up the river, a ship blasted its horn. Others followed suit, and I braced for the blare of sound from our own. Then the disparate hifi systems coordinated to bring us Bond themes as fireworks burst above the castle. Breathtaking, awesome and a little bit cheesy, like all the best things in life.

It would have been nice to have been transported straight to bed as soon as the fireworks ended, but we needed to turn around and ply our way back to Boppard. We resumed our seats in the dining-room and wondered about coffee. A jolly German gentleman who joined us turned out to be the ship's owner, and ordered everyone an ice cream on the house. This, along with flagging down a waiter to demand hot beverages, perked everyone up to a state where we could make a nuisance of ourselves by standing in the gangway near the DJ, dancing to YMCA and Cotton Eye Joe. Hotel and bed 2am. 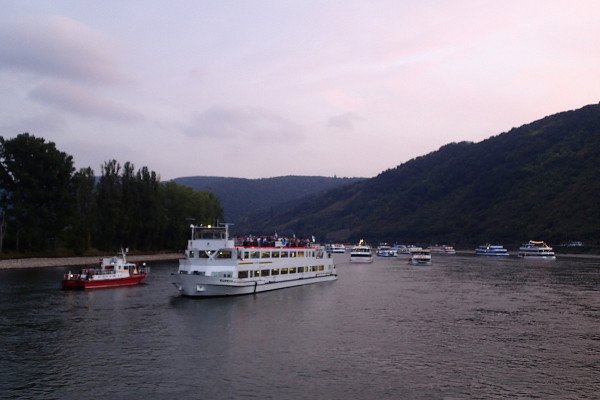 We were granted a much-needed late start: 11am instead of the usual 9:30. The day's riding would take us towards home in a leisurely fashion, making use of some outstanding biking roads. Unfortunately my intermittent bike problem reared its head again, and this time spooked me enough to spoil my riding for much of the morning.

Along the Mosel Valley, with castles and vineyards across the water, to lunch in Cochem. Here I had Toast Hawaii, which I remembered fondly from the school German exchange (white toast topped with ham, a pineapple ring, and a slice of melted cheese) and grape juice, the next best thing to sampling the local wine.

The world seemed a better place after lunch, as it generally does, and as my bike had been behaving itself I settled back into the ride. This was Nürburgring country, on a sunny Sunday in August, and the roads were busy with bikes of all stripes. Some I overtook, some flashed past me in a blur; some returned my wave, some were too snobbish or focused.

We encountered several sets of roadworks with temporary traffic lights, where I used my London commuter skillz to filter to the front of the queue. At the first of these I waved a group of sports bikers (two were strapping Valkyries with blonde plaits emerging from their helmets) past me, since they would be quicker off the mark. I smiled at the leader, scary under his balaclava.

"You are underpowered!" he told me, smiling back.

I rather hoped they'd find the temporary road surface tough going, but they proved to be excellent riders, and gave me a nice wave when they turned off at a petrol station in the next town.

By now the group had become scattered, and I saw nobody for some time except Andy on the MP3. He was going at such a cracking pace that I was content to tuck lazily in behind him and follow, until he waved me by. To my surprise I found that only Jen was ahead of me, waiting to point us in to a petrol station. By the time the main body of the group arrived I had filled up, paid, and was smugly enjoying an ice cream sandwich.

From here it was only another 45 minutes to our hotel, although there was still time for one last set of roadworks. I was the lucky marker who got the roundabout just after these, where the road went downhill and curved back on itself, so I could wave at the others as, one by one, they were caught by the lights.

We had arrived with time to explore the cobbled and half-timbered town of Monschau, but I preferred to get straight in the promised pool, to which I had been greatly looking forward all week. It was small but lovely, and after a refreshing swim I hopped in the sauna with Jen for a lovely chat marred only by a naked woman who shushed us. (She was totally in the wrong; I have it on good, ie Scandinavian, authority that the point of a sauna is to drink beer and talk bollocks, and we were all out of beer.)

Everyone assembled in the hotel bar to walk downhill into the town for dinner at a restaurant with kitschy decor and a salad bar full of things I like, including jalapenos, olives and beetroot (what are these things you call 'fresh vegetables'?). John had collected our orders at the lunch stop so they could be prepared for us, and I was not disappointed by my trout. Afterwards we were served a mystery dessert which seemed to be pineapple chunks in a vanilla custard, followed, since it was the last night of the holiday, by speeches, thank yous and rude jokes.

We ended the evening in the hotel's games room, playing 20-year-old pinball machines which had been converted from Deutschmarks to euros and getting competitive on the tiny skittle alley. Nobody did better than seven out of the nine pins - I think my best was four - and the high point of the game was when Lynn's ball rolled gently down to the pins, knocked two of them down, then rolled politely all the way back up.