The day began with a briefing - and, for Howard, a topup from Bike Normandy's petrol can, as we'd meant to fill up the previous evening but ended up not bothering (my bike's impressive MPG meant I reckoned I'd be OK). While John explained the marker system and the workings of French road signs, I looked around at my fellow travellers, trying to pick up clues from their manner, appearance, and, when we got moving, what they rode and how they handled it. The smallest bike on the trip was Lynn's Honda CB400, then Andy's 500cc MP3. An immaculate Ducati Multistrada, a Moto Guzzi, a couple of big Triumphs, and the usual BMW RTs and GSes. The tour had been billed as suitable for pillions, and most bikes would be ridden two up.

Extracting ourselves from Calais was good practice for the marker system, with many roundabouts to be indicated for those following. Then on to the fast, flat roads of northern France, with their excellent visibility, bike-friendly drivers, and, this time of year, a profusion of wild flowers. By the coffee stop in a market town ("Don't all go to the same place!" John instructed) we had enough shared experiences to ensure conversation.

The second part of the morning was spent on the motorway. John had said it was 60 miles until the next petrol stop, which my bike would manage easily. However, 60 came and went and we were still going. The last bar of my petrol gauge had started flashing soon after we joined the motorway, and although I'd been going at a reasonable cruising speed to conserve fuel I was concerned enough to be very relieved when we exited the toll booths, since at least if I ran out now it would be easier to sort out.

Jen promised me it was only another two miles, and I made it, of course. There is nowhere on Earth hotter than a French petrol station at lunchtime, but another mile or so down the road we stopped in the pretty town of Saint-Quentin, with its brutalist municipal hall and many eating opportunities. Several of us selected the Golden Pub, where Howard and I shared a Bruce Lee pizza (chicken, peppers, peanuts and a raw egg).

We continued through France, past a sign advertising a cider festival and car boot sale (two of my favourite things, together at last) and into Belgium, whereupon the road surface deteriorated instantly to a cracked nightmare and the wide curves you could see round gave way to tight, closed bends. The landscape went from flat farmland to wooded hills, and we climbed into welcome cooler air. Early evening found us in the town of Bouillon, which I wanted to be famous for its soup but I don't think was. Up a narrow, winding road and down into the gravel car park of the aptly named Hotel Panorama.

"Have we ever stayed in a four-star hotel before?" Howard asked me, awed by the views from our window and the constellation of LED lights over the bed. (Yes, when they're cheap on hotels.com, is the answer.) There was just time to enjoy the view over a drink before retiring to two enormous tables in the dining-room for a set menu and a dissection of the day's adventures. Then, more panorama, now dark and glittering, before turning in. 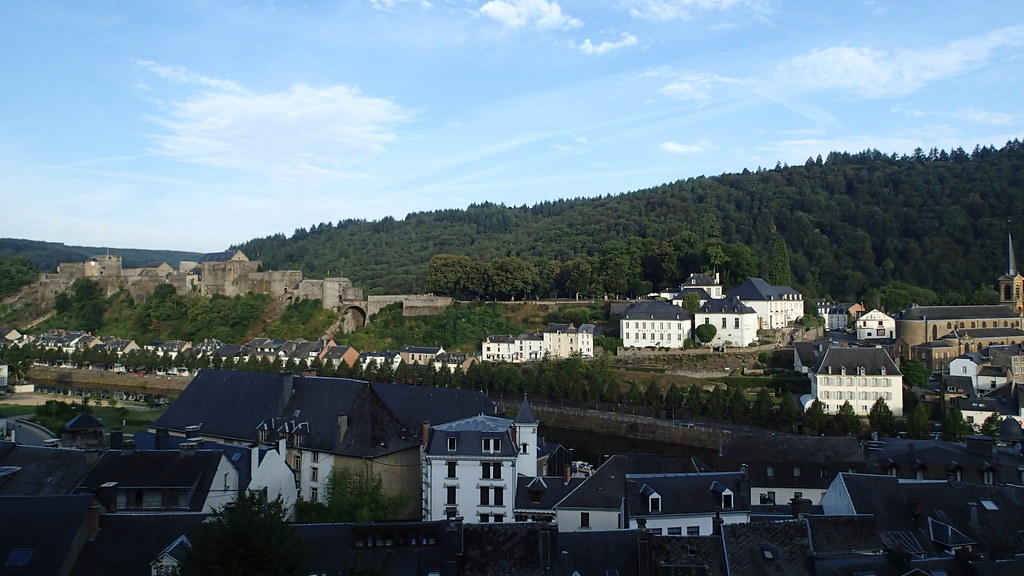 This year marks the 75th anniversary of the Battle of Britain, and today's flypast from Biggin Hill commemorates one of the darkest days of that period.

Takeoff was scheduled for 1pm, and it dawned on me that, with Biggin just fifteen minutes up the road from my office, I could pop along in my lunch break and check it out.

Of course, I wasn't the only one with this bright idea. Traffic was crawling, and cars were parked for a mile each side of the airport, in pub car parks, in laybys, on verges and, in the case of half a dozen motorbikes, on a particularly large traffic island.

I found a cheeky space on the double yellow lines, between two cars, and joined the hundreds of other people staring agog through the wire netting as the aircraft taxiied. Takeoff was at the other end of the runway, but the planes circled round so everyone got a look. The sight and sound were awesome as, for a few minutes, the sky over Kent was as crowded with Spitfires and Hurricanes as it was in 1940.

I may, in the past, have complained about how difficult working in Bromley makes doing stuff in London after work. Bromley, you have redeemed yourself. 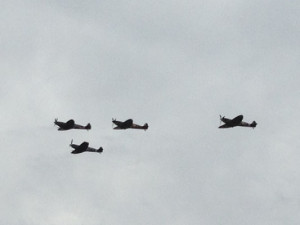 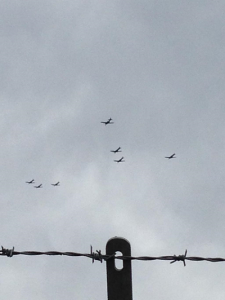 Having woken uncharacteristically early, we walked down flights of steep steps, past vegetable gardens and a man coming the other way with a bag of bread, to the town proper, had a look at the river and back up at the hotel, then returned. Following a splendid buffet breakfast which included DIY pancakes, we hit the road.

This morning I put my bike in manual mode, and the added control allowed me to enjoy the Belgian bends a little more than I had the day before. By the time I was called upon to mark a junction, I was far enough ahead of the pack (thanks to an aggressive overtaking policy) to whip my camera out and take some action shots of the other riders approaching.

Coffee-and-petrol time found us on the border with Luxembourg, parked outside an enormous duty free booze emporium which Howard and I found time to explore. When we set off again, I, unusually, went in front of Howard, so he could film my ride. We spent a happy twenty minutes in pursuit of Jen before we came to a junction and I was dropped off as marker.

Pointless though it is, I have spent a good deal of time since then thinking up scenarios in which things might have been different if I'd been in my customary spot behind Howard, and regretting the fact that being left at the junction meant I was one of the last to round a nice, wide downhill bend, only to see Howard's bike on its side in the middle of the road and Howard sitting against the barrier being helped to take his helmet off.

I confidently expected him to be up and running again in minutes, very cross about the fuss everyone had made. Instead, First Responders arrived, summoned by a car driver who witnessed the off, then the police and an ambulance, which I announced my intention of following on the bike.

"Don't stop for anything, Alice," Jen told me, after checking I was in a fit state to ride. "If the ambulance goes through a red light, you go too." I positioned my bike behind the ambulance in a state of readiness; a helpful Luxembourgeois policewoman told me the ambulance would in fact be going in the opposite direction; I turned around again; and we were off.

We made a stop in a layby so a doctor could join us and make an inspection, then we set off again. I rode between the ambulance and the doctor's car, both with their flashing lights on. Strangely, none of the bikers I saw going the other way returned my waves.

I have nothing but praise for the medical staff, all of whom spoke four languages and were incredibly nice to me, keeping me up to date on what was happening - including which town and what hospital we were headed for. I did mislay the ambulance shortly before our destination of Ettelbruck when a coach made way for it, but spotted it again and found a safe place to park in time to watch Howard getting unloaded and wheeled off. I was taken away to fill in forms, then instructed to wait in the waiting-room.

Bike Normandy's John, who had stayed behind to sort out the police and a local garage while Jen led the rest of the group onward, found me there an hour later and immediately went off to the cafe to buy me a Coke and a sandwich. Eventually a doctor appeared ("I go fetch your woman," I learned Howard had been told), and once all documents had been produced we were allowed to leave, Howard with a souvenir X-ray of his floating shoulder.

The next three nights would be spent in the same hotel in Germany, which was lucky. Howard went as a passenger in the Bike Normandy van, and I followed up the motorway to Boppard, on the Rhine - arriving minutes after the rest of the group, who had got lost on the way. I wanted a bath and a bucket of gin, but at last everyone was where they should be.