One thing we hadn't managed to do during our stay in San Francisco was visit Alcatraz. It turned out Jim had never been, either, so the three of us decided to make a proper touristy day of it.

Getting to the city by scooter would involve freeway, and the little LX would struggle to keep up with the bigger machines. So I took the white 300cc, with Howard on the pillion, and we set off.

We crossed over the Bay Bridge. Ocean to the right, palm trees on the left, mountains in the distance and my boy on the back - cool. Soon we'd found somewhere to park, enjoyed some overpriced hot dogs, and boarded the boat for the island.

I hadn't been too fussed about visiting the former prison, as I'd got the impression from the souvenirs offered on the mainland that it would be super tacky. In fact, the crumbling prison in its beautiful grounds was creepily atmospheric, the audio tour respectful and fascinating.

In the evening, we were to join a local Vespa club for dinner. The Quitters take everything about as seriously as my own scooting circle, the Donkei Skök Scooter Club, and I was looking forward to the meeting.

Traffic across town was slow even with the ability to filter, or 'lane split' as they call it over there, and we were also held up at a level crossing while two of the double decker Caltrains screamed through (I didn't mind this so much, and waved frantically).

At last we reached a pub called The Connecticut Yankee, and were joined in due course by people whose faces were unfamiliar but whose online handles - Bonkers, Mr Zip, The O.Z. - I knew from the Modern Vespa forum.

Someone had come on one of the electric Scoots whose headquarters I'd visited on Day 5. There was a great deal of mockery, and The O.Z. contended that he could outrun the Scoot on foot. I was chosen as the Scoot rider, and although it was touch and go for half a block, I did manage to steer my electric steed to victory.

Pub food arrived and, anticipating a long, cold ride home in the dark, I cleared my plate of fried chicken, mashed potatoes, green beans and milk gravy. There was a strong wind blowing as we returned over the Bay Bridge, Jim's headlight had gone, and the whole business was much scarier than the journey in had been. I was glad to get safely back and tumble into our airbed. 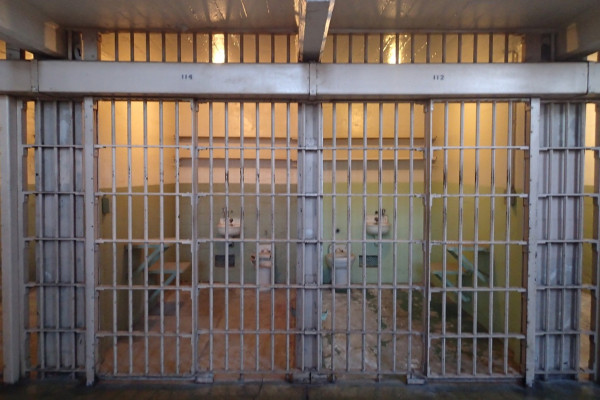