This was the day I rode a tandem over the Golden Gate Bridge. No other comment is necessary, really.

We fortified ourselves beforehand with brunch at the Pork Store (very authentic; the coffee came with free refills and lipstick on the mug). I enjoyed a Southwest Scramble, consisting of scrambled eggs with chipotle sausage. I knew that biscuits were like scones, but hash browns actually looking like grated, fried potato rather than deep-frozen brown triangles was a new experience.

Then we headed down Haight to hire ourselves a tandem. As we waited our turn at the bike shop, a man cycled past pursued by a terrier painted lilac in patches.

It had been a while since I'd ridden a tandem, and I'd forgotten both how tricky they are to ride and how terrifying for the person on the back. We did well through Golden Gate Park, with a stop to admire the bison, but were soon defeated by the hills on the coast road. And once you've stopped to push for a bit, that's it for that hill, because coordinating a hill start to take off again is next to impossible.

At last we reached the bridge - so red! - and cycled across its mile and a half. There's a separate lane for bicycles and pedestrians, so we were free to admire our surroundings.

On the other side is Sausalito, whose name always tickles me for some reason, and it's downhill almost all the way. We caught the ferry back to the city, with chilly but golden-lit late afternoon views of Alcatraz and the Bay Bridge. We were ushered off the ferry by a very brisk official ("Put your wheel on the ramp sir, then your partner helps push. Push, partner, push!"). Then we had 45 minutes to get the tandem back to Haight Street.

It was dark, and we got a bit lost, and despite a cheerful hail of "Tandems rock!" from an overtaking cyclist we were feeling dispirited. If we missed the 6 o'clock deadline, when the shop closed, our alternative was another branch which closed at 7...back at the ferry port, which wasn't a pleasing prospect.

We were ten minutes late, but luckily the owner hadn't yet closed up, and we disposed of our albatross. My next stop was the soda shop a few doors up, which I'd had my eye on for days. Fizzy pop never tasted so sweet.

We had dinner with Kate and Tom at a nearby French restaurant, Zazie, where I had the signature dessert: a large cup of melted chocolate topped with marshmallows. I managed to eat less than half of it, despite wanting to eat nothing else for the rest of my life. 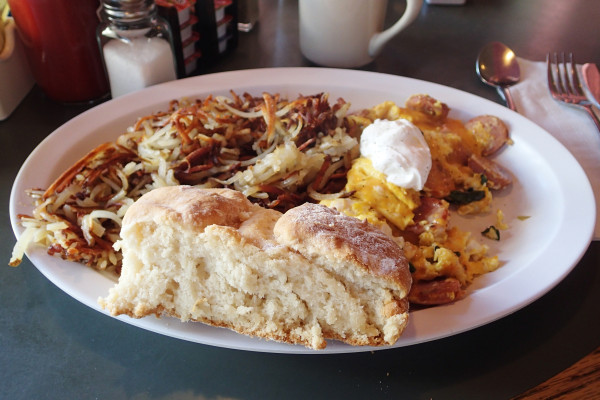 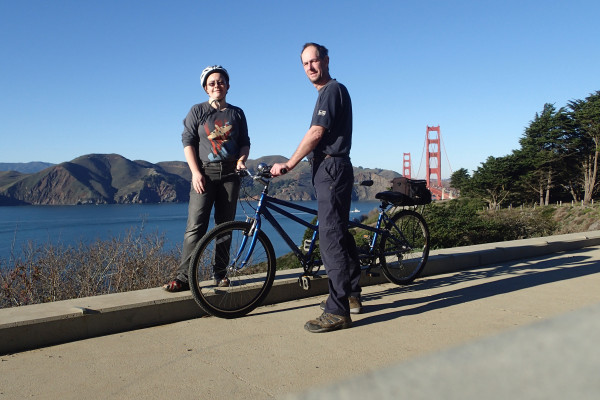 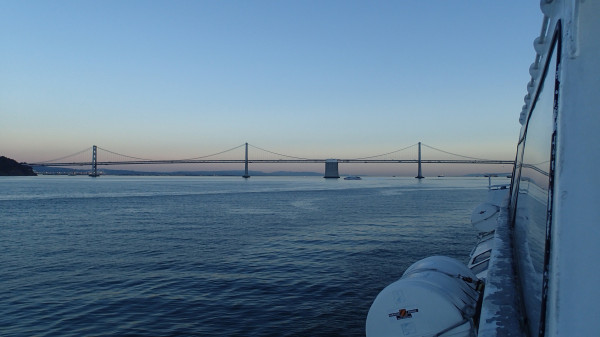 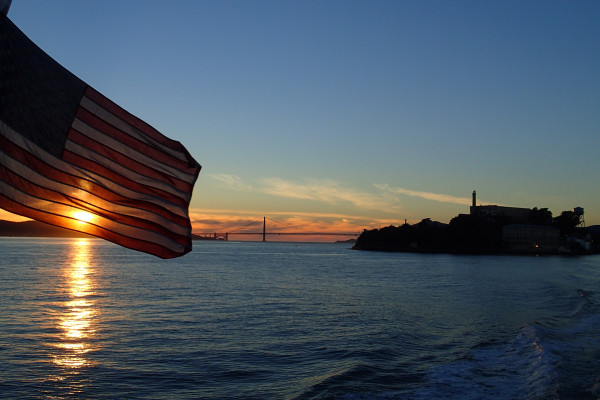