Waking up to news of Lauren Bacall's death was less of a shocker than waking up to news of Robin Williams's - she was 89 - but sad, nonetheless. She had the same birthday as me, she had a gorgeous voice, and she was married to Humphrey Bogart, which made her an icon in my book.

(I always found it faintly astonishing that someone who had been married to Humphrey Bogart could still be alive, as if one of the Knights of the Round Table was still going. Bogie, to me, inhabited a similarly legendary time.)

There's a running gag in

kyellgold's furry universe about 'Lauren Bacollie', which always makes me smile, and he's written a short thing in her honour. Me, well, I'll always think of her on our birthday. 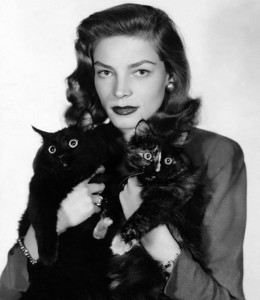