"What would you like for breakfast?" asked the landlady in mostly-German. "Bread? Jam? Ham? Cheese? Eggs?" I froze with option paralysis, and she brought us all the above named (the eggs were scrambled, and delicious) as well as some ripe figs. And a plate of tomatoes, but I forgave her.

Once packed, we had three hours to get ourselves to Koper, back in Slovenia, and board the Motorail, or autoslaaptrein, which would whizz us overnight to 's-Hertogenbosch in the Netherlands. We stayed off the motorway, taking back roads past roundabouts planted with lavender, and I remembered my desire to buy a string of garlic from one of the roadside stands. At the first one I tried, the stallholder just shrugged and said "Nicht verstehen" when I pointed at the garlic while holding out my wallet, so we concluded he must not want my money and moved on to a more amenable salesperson. (My top box, and the rest of its contents, recovered from the garlic in due course.)

We hit a long queue before the border and filtered through as best we could, hampered by a group of Czech bikers who weren't very good at it. Finally, ten border crossings into our holiday, we had our passports checked - although the customs official seemed only to be checking that it was indeed a passport, rather than examining my details.

By following signs for the station and then spotting a parked bike, we found our way to the right platform and were told to remove any luggage we wanted on voyage before riding the bikes on to the train. It was only when Howard ducked that I realised the roof of the vehicle compartment was so low I would have to crouch right down behind my windscreen. I stopped to rearrange myself and simply could not get going again, bottling it utterly. The staff were very nice and one of them radioed another to send Howard back up. He parked my bike for me while I reviled myself for being so rubbish, then we watched until both were safely strapped down.

Our sleeper compartment was small but comfortable. We dumped the luggage then headed to a supermarket for more supplies, particularly of the liquid variety, since it was a hot day and we didn't fancy paying train prices for refreshments. (Bringing your own alcohol is forbidden but we may possibly have transgressed, and telltale ringpull sounds from the neighbouring compartment told us we weren't alone.)

As we waited for the off, our charming Dutch steward popped in to show us how the wash basin worked and offer us a plastic glass of champagne. At last we were moving, the air conditioning kicked in, and we sat back to enjoy the view.

It was peculiar, whizzing back in the space of a few hours past places we'd been over the course of a week. We saw fields, mountains and stations, raced cars on the motorway, and waved to a group of bikers waiting at a level crossing. We shot through tunnels and sat through mysterious stops and changes of direction. It rained; it stopped raining; we were brought our 'airline style meal' and a coffee. Night fell and we climbed rapidly into the Austrian mountains, towards the moon.

When it was too dark to make out anything more, we summoned the steward to activate our beds and I ascended to the top bunk while Howard took the lower. 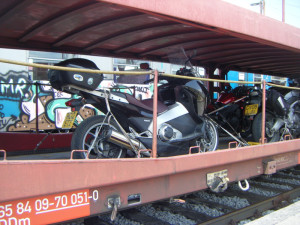