Once I'd walked down to the post office to dispatch the Slovenian batch of postcards, it was time to leave our apartment in the mountains and move on to the town of Logatec, near the capital city. We had all day to do it, so elected to stay off the major routes and explore a little.

Inevitably, this meant another road that turned to gravel with no warning. If I must do gravel at all I prefer to do it in a straight line, at a steady pace, so the bends, ascents and descents we encountered were disconcerting to say the least. Round one corner we were surprised to come across a group of very young soldiers with very big guns, who gave us startled looks through their camo facepaint but let us pass.

After a particularly tough uphill bit I shuddered to a halt. We paused for refreshments, and for me to wipe a large, dead insect off my glasses. This was well-timed, as the only other vehicle we saw, a red car going the other way, passed while we were parked at the side of the road rather than meeting us head on. The driver stopped to ask if we were OK; I said that we were, but how long was the road like this?

We emerged unscathed, but with bikes and clothes so covered in white dust that we might as well both have fallen off, and stopped for ice cream in a little town with lovely murals on the walls of the post office. The roads climbed and fell, went from single carriageway to single track and back, and eventually delivered us via Vrhnika, where we had lunch, to Logatec.

Our hotel, the Gostice Jersin, was advertised as biker-friendly, but wait - what's that other symbol under the motorcycle?? Google Translate says:

Love Nest Rooms are available for sleep it off, but also to unwind and relax in the afternoon, from 12 to 18 pm or by appointment.

We arrived with some trepidation, but it was a perfectly acceptable hotel with a dry and roomy garage for the bikes.

The evening felt a little anticlimactic; we'd arrived a bit early to eat, a bit late to ride off somewhere else, and the town wasn't exactly brimming with sights and amenities. But it did have an enormous supermarket, and foreign supermarkets are one of my chief holiday delights, so we took the oppotunity to stock up on drinks and snacks before repairing to a pizzeria opposite the railway station.

I had always assumed I would be able to understand a pizza menu in pretty much any country, but I was baffled by Slovenian. We ordered what was obviously the house special on the grounds that it would probably suit us both. There was one unrecognisable topping - horse radish, perhaps? - but it was tasty and filling.

We had been puzzled over the last few days by the many roadside signs offering 'malice', often at certain times, e.g. MALICE 10 - 12. Howard took this opportunity to ask a waitress what it meant, and we learned it was Slovenian for 'brunch'. I can see 'going out for a spot of malice' becoming a tradition. 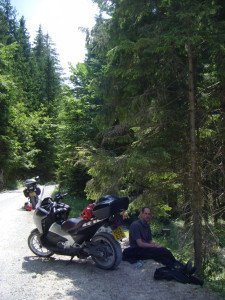 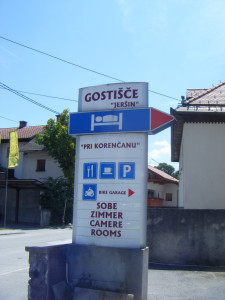 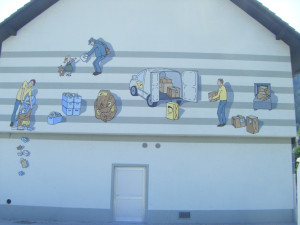 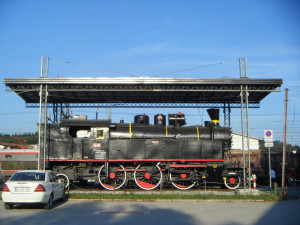