The plan for today was to do the Vršič Pass along with some of the First World War Italian front. With a whole day at our disposal, we set off at a leisurely pace through pretty Alpine scenes of forests, cow pastures and the hay racks for which, it turns out, this region is famous.

Then the road we were following suddenly turned to gravel. Now, riding on gravel gives me the absolute heebie-jeebies; I hate the noise, and I hate the feeling, especially since with a large, tall bike I know I won't be able to save it if it does start to go. Rather than turn back, we decided to press on and see if it got any better. We passed a burned and abandoned village, razed by the Nazis, and crossed a little bridge. Eventually we emerged onto tarmac, and thence to bigger, faster roads.

Having experienced what passed for an unremarkable A road in Slovenia, I was nervous about the mountains ahead, and more so when the skies darkened in the direction we were making for. Thunder rolled close by, and we stopped in a layby to don waterproofs and make a plan. My suggestion was to press on and see what the weather did, stopping for lunch before the pass if it hadn't cleared up yet.

We did just that, parking outside a bar and negotiating in German with the proprietor for cheese and ham toasties. A friendly Austrian biker dropped by our table to compare notes, the sun came out, and the road dried. Vršič was on!

From my online research, I knew that the hairpin bends on the north side of the pass were cobbled. I was somewhat apprehensive, but they proved to be no problem in the dry. I had also learned that there were 48 hairpins and that signs helpfully numbered each one off. Working out what percentage of the bends I'd done was a fun game, and after 24 we found ourselves at the top of the pass, where we could admire the view, take photos, and in my case buy a sticker for bragging rights.

The sky was threatening again, but the descent was all tarmac and went quickly, so that Bend 48 brought a sense of triumph. When the 49 sign appeared I felt betrayed, but that really was the last one. The sun appeared again, and we rode down into heat and humidity. We spent the rest of the afternoon on smooth, fast roads, the good bits helpfully highlighted by signs forbidding us to fall off, and rode back to our village past Lake Bohinj again.

It was a higher-mileage day than I'd expected, but they were good miles overall. I spent my evening writing postcards and watching the mountains fade to black against the sky. 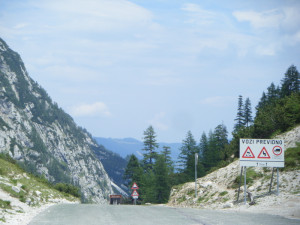 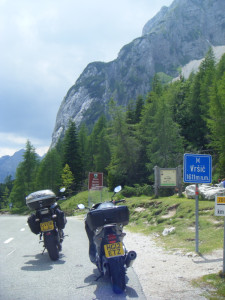 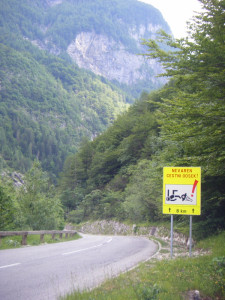