We woke at eleven on the morning after our mileage marathon, to a bright day with mountains in the distance and a hummingbird hawk moth in the window-box. We strolled through the village, remarking upon churches and garden gnomes along the way, to shop for supplies at the small supermarket. Most of the brands and many of the items on display were baffling, but after a lot of smiling and pointing we equipped ourselves with bread, salami and local cheese, which we brought home and ate.

Howard refused to go anywhere during the hottest part of the day, which left me fizzing with impatience until three, when we set off for nearby Lake Bohinj and it promptly started to rain. Luckily for Howard, it was only a shower.

We rode around the rim of the lake and up a hill to the end of the road, where a waterfall was promised. (The Slovenian for waterfall, by the way, is 'slap'.) Signs warned of a twenty-minute walk, and you had to pay to get in, but the falls, and the views on the way, were worth it.

Then, finally, we parked by the lake and I had a swim, which was what I'd really been looking forward to all along.

It was early evening, and beginning to be chilly at the end of a long, hot day, so we had the beach almost to ourselves. The water was a litle cold, but clear and pure. I could see no other swimmers; apart from a couple of kayaks and a passing pleasure boat, the lake, with its fringe of mountains and lid of empty sky, was all mine.

We arrived back at the apartment to find that the dessert fairies had paid a visit, and had deposited two helpings of pastry layered with apples on the kitchen worktop. 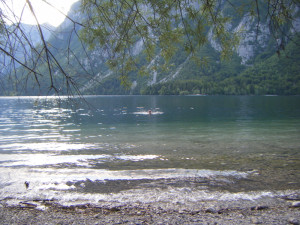 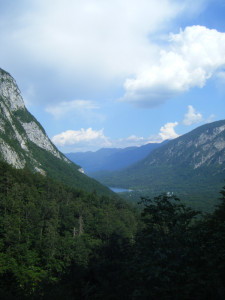