On Friday evening I headed to Foyles after work for the world premiere of Bête Noire, the third in Bryan Talbot's series of Grandville graphic novels. For those unfamiliar with the franchise, Grandville is set in a steampunk alternate past in which Napoleon conquered Britain - oh, and almost everyone is an anthropomorphic animal/bird/fish. There are robots and sex and violence and unlicensed cameos.

At a previous talk, Talbot had announced that the next instalment in the series would be 'James Bond style', so I'd been greatly looking forward to it. I haven't had a chance to read the book yet, but the cover, and the panel we saw during the talk which featured Paddington Bear, promise great things.

Halfway through, Bryan's wife Mary joined him to discuss Dotter of her Father's Eyes, a memoir comic about her own childhood and that of James Joyce's daughter. Then it was time for Q&A.

Somebody asked what sort of voice Talbot heard for LeBrock in his head, and he said that he'd had Gene Hunt from Life on Mars suggested. This is how I shall imagine him speaking from now on. My favourite question, however, came from Kim Newman in the interviewer role: "How do you make animals sexy?" Apparently he is unaware of that sizeable subculture which sees nothing unusual in admiring the musculature on an anthropomorphic badger.

What with the ticket, the book and a couple of Christmas presents picked up incidentally, Foyles did rather well out of me. I also learned during the introductory speech that Posy Simmonds - POSY SIMMONDS! - will be doing an event this Wednesday evening, the 14th. I have purchased my ticket.

Alice Dryden takes a test ride on both and brings us a quick comparison.

elfasi asked if I fancied going to Discover Dogs on Saturday, I jumped at the opportunity. I knew I'd been before; when I checked LJ, I was startled to realise it was ten years ago. (Clothesvember fans, I have a feeling I wore the same top on that occasion as on this: an orange one from Gap Kids with a husky and the slogan 'Cycle Racing Team'.)

I parked my bike in the Red Car Park, held the door for a couple struggling to manage four pointers and a small child, and queued in the rain for the ten o'clock kickoff. Once the doors opened things moved quickly: I got in soon after ten and was having my face licked by an Eskimo Dog five minutes later.

Discover Dogs is lines and lines of stands, each containing examples of a dog breed along with their owners. Strokes and cuddles are encouraged; hand sanitiser is readily available (a change from my last visit). I gained a fair amount of dog breed knowledge at that childhood stage when absorbing facts comes easily (I should probably have been learning something more useful, but how was I to know it wouldn't always be like that?), yet I encountered plenty of dogs new to me, like the large and splendid Tibetan Mastiff. So I really did Discover Dogs!

The best breed ambassador in my opinion was a Finnish Spitz named Cherish, who sat and grinned while I rubbed her behind the ear. I also spent a lot of time with the Shiba Inus, a long-time favourite. If I ever get a dog of my own it will probably not be a husky, because they're mental, but something small and pointy in the spitz family. (My ideal dog would be approximately cat-sized, for ease of portability and to look cute next to any cats I might also have.)

We watched some flyball in the arena, followed by what turned out to be my favourite thing of the day: dancing with dogs, starring a tiny Chihuahua cross and her human.

elfasi informed me that he was Richard Curtis (not that one), a leading light in the field of heelwork to music. Here is his website, and here is his Chihuahua. Most adorable dance routine ever!

Walking back to the car park, I saw one of the Leonbergers earning its keep by pulling its owners' possessions in a cart. I filtered home past cars with number plates ending in DOG and K9.

It was lovely to see

elfasi again, and to meet some other furries, some of whom I knew online while others were entirely new to me.

Here are some Norwegian Buhunds watching their owner shake the treat jar. 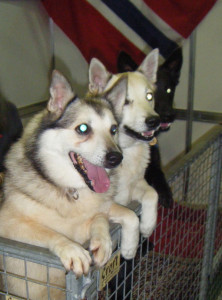