Tuesday and Wednesday were Press Days at the bike show. I met Rick on Tuesday morning, received my press pass, and we set off to cruise around the stands pointing at stuff and taking photos.

This being Italy, centre stage went to the local brands: Ducati had acres of space for their new Panigale, plus the rest of the stable and all the merchandise you can buy to complete your Ducati Lifestyle, from aftershave to chocolate to babygros (the Ducati seduction technique?), with staff poised to polish the bikes should a speck of dust dare to alight on one.

To my joy, scooters enjoyed far greater prominence than they do at bike shows in the UK. BMW and Honda are both launching droolworthy new maxi-scooters which took pride of place on their stands; Lambretta is back and setting themselves up as a rival to Vespa once more; Peugeot was showing a concept three-wheeled scooter along the lines of Piaggio's MP3.

It was my last night in Italy, so I took myself out for pizza. I had one with shrimp and rocket, and the chef had tweaked the edges of the dough all the way round to look like little sunrays.

Wednesday morning was spent visiting the booths of helmet and clothing companies with whom Rick had set up meetings in advance. I was impressed by his thoroughness, and by the respect he commanded from the people we met; webBikeWorld is perhaps one of the biggest sites dedicated to reviews of motorcycle kit, and certainly goes into the most detail, to the extent that a good review there can really help a small company.

On the Spark stand (warning, noisy website), as Rick photographed the new range of high-tech one-piece underwear, I was captivated by a balaclava with a design of pawprints and cat whiskers, and admired it so wholeheartedly that I was given a sample. Perks!

Around 3:30 I ran off to catch a bus to the airport. Malpensa's departure gates are hell, with nowhere to sit down, and the flight was so full they ran out of room in the overhead lockers and my cabin bag had to go in the hold, and the East Croydon trains were delayed. But I was safely home, with my luggage present and intact, by 9.

More of this on Flickr, should you enjoy looking at photos of bikes: 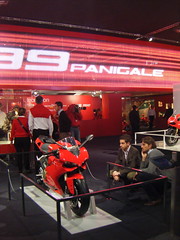 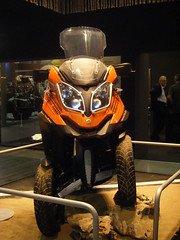 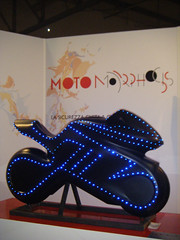 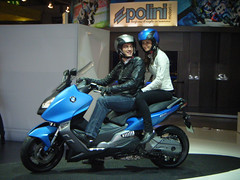 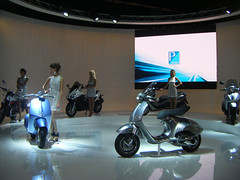